I put a poll over at the The Briar Files regarding a tobacco I have been smoking lately called 1792 Flake.

This is a full strength, mellow tobacco comprising a blend of dark fired Tanzanian leaf. It is Gawith's best-selling premium grade flake. It starts as 7 lbs. of hand stripped leaf and goes through a steaming process prior to being pressed. The cake, having been prepared, is wrapped in a select leaf and packed by hand into a 12 inch square. This cake is pressed and left for a minimum of two hours. Then, the pressed cake is placed into a steam press where it is baked at full heat for two to three hours. The baked cake has then taken on 1792's characteristic rich, dark color. It's hardening occurs during cooling. Once the process of cutting the flake and adding a tonquin flavor is carried out, hand wrapping and packing finalizes 1792, making it ready for rubbing into your pipe. Also sold as Cob Flake in Europe.

The way the description is written, it's almost as if they said, "Oh yeah and by the way we put tonquin flavor in it." What does tonquin taste like? Well, it tastes like tonquin (a.k.a the tonka bean). Alas! I am almost out and will have to order more soon. Once I developed a taste for it, there was no stopping me.

But I have been greatly amused that so far 8 out of 13 respondents have chosen "Blasphemous scents from outside the spectrum of mortal sensation, of which no man may breathe the noisome vapours and still remain wholly sane."

I don't really have anything else to blog about today. I got rained on briefly this morning, and since it was raining I left my phone in my truck and didn't try to take any work pix. More rain is threatened all week, so I might not take any pictures for several days.

I did see the biggest one of these I've ever seen so far: 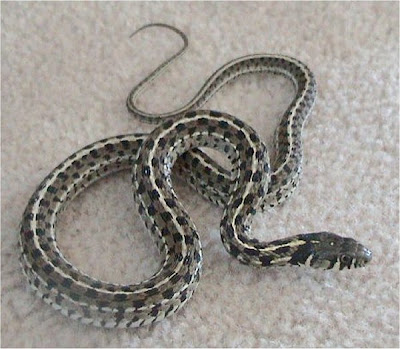 That's the speckled, or checkered garter snake. I've never seen one out here where I live, but these are by far the most common snake to find in meter boxes. I didn't see its full length, but it must have been a good inch-and-a-half thick in the center of its body. So far I haven't found any venomous snakes while working (not in this job, anyway), just a lot of these, and one coachwhip and one that I think was a bullsnake but I'm not sure. Also one striped garter snake just a few days ago.

One time on my previous job I found a coral snake sprawled out underneath a gas meter.

The most common question I get asked about my job is "do you see many snakes?" Apparently most people are scared sh*tless of snakes. I guess I've probably had more exposure to snakes than the average person, or the average resident of San Antonio, anyway.

Other animals I have encountered: toads. Lots of toads. Totally freakin' ungodly quantities of toads. And I would by far rather come across snakes than toads. One frog. You don't usually find frogs in meter boxes because they prefer wetter areas, but if it's been leaking long enough it might get a frog in it. Roaches by the million. Rats. Mice. And one gopher, at least I'm pretty sure it was a gopher. Cats. One possum so far. Oh, and spotted geckos--lots of those, too. They tend to panic and head for the nearest dark place, which is often my pants leg.

Most recent random 10 on Winamp:

Pat Metheny is another one that I really like, although some might argue that he doesn't do "real" jazz (but fusion, if you really have to make that distinction). I have several more lined up in my yourmusic.com queue that should be arriving in the coming months.

I have only one Billie Holiday collection, a two-CD set that covers everything she recorded during her time at Decca (from 1944 to 1950). This includes out-takes and some studio chatter, which I'm not really interested in but it looked like a good way to start at the time. Also I have a few other random tracks of hers on various compilations. I can't stand too much Billie Holiday at one time. I have to take her in small doses. But I suppose I'll talk more about that when I get into the jazz section of my digital collection.
Posted by AlanDP at 7:08 PM