Look at the brickwall gravestone where some kid was sprayed
Saying nobody could be bothered here to rule O.K.
Don't believe it, don't believe it what they say on TV
There's no romance, no romance
For Joey in this city.
I don't have a whole lot to say about this one, either. Purchased in the late 80s, the Boomtown Rats were recommended to me by someone who I respected and admired but who is no longer with us. This tape always reminds me of him. Actually it was the same person who told me I looked like Iggy Pop.

The tape's audio has suffered a little, although it is still listenable. I might go to Amazon and download "I Don't Like Mondays" just so I'll have a good copy of that. It's my favorite song of theirs, and other than that I never really got into their sound.

Since Amazon doesn't have a link photo, here's a picture. Bob Geldof (upper left), of course, went to on do all kinds of charity work, and played Pink in the movie of The Wall. The rest of them? I don't know. Check Wikipedia. 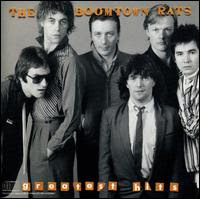