A comment on yesterday's post put me in mind of album cover art, and here are three very imaginative, detailed, and in relation to the music, symbolic pieces of album art.

In a way, the old records are better, because the pictures are much bigger and it's easier to pick out details. In another way, the CD booklets are good too, because all these pieces are continuous to both the front and back of the cover, and with a CD booklet they can be folded out, scanned, and observed in full. Click on all the pix for much larger versions (about 1000 by 500 pixels). Unfortunately, when you start with a small picture, you still only get a large version of a small picture, so a lot of the details are hard to pick out. But since my scanner isn't big enough to do a whole record cover, these will have to do.

I would also like to state clearly that when it comes to these albums, I did not buy them because of the cover art. I bought them for the music.

Marillion are a British rock group who are still extant. However, the original lead singer/songwriter left the group a long time ago, and in my opinion he took almost all the songwriting talent with him. His lyrics are often mysterious, dark, brooding, and unlike a great many rock lyrics, actually poetic. And by poetic I don't mean that everything rhymes and has perfect meter. I just mean poetic. 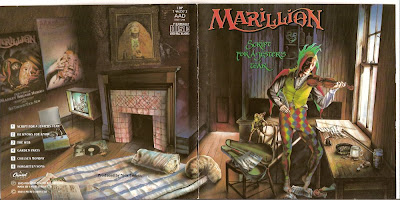 Script for a Jester's Tear was their first studio album. As far as I know, the concepts for all these covers was from their lead singer/songwriter Fish (real name Derek Dick), but the actual artist who created them is named Mark Wilkinson. The Jester is a running theme throughout these covers, and there are other items that appear in more than one, such as the records scattered on the floor, the chameleon (in this one climbing on the chair just above the violin case), the magpie, and the television that is on but not being watched. The posters on the wall are reproductions of real posters advertising the band, and the records on the floor are real records. The one closest to the record player is Pink Floyd's A Saucerful of Secrets. It's hard to tell in this version, but it's obvious if you look at the full-sized record cover. I expect that the portrait of the woman is a real person, too, but I don't know for sure. Besides the Jester standing at the window trying to write a song, there is another jester image in the clown on the TV screen.

Fugazi was their second album. More jester images. The man lying on the bed is naked except for a rumpled sheet and the tattered remains of jester's leggings, however if you check the mirror behind him you will see that his reflection is fully clothed in the jester's motley. The portrait of a clown leans against the bed, an unfinished puzzle showing a jester lies on the floor, and there's a jack-in-the-box on top of the (ignored) television. The magpie and the chameleon are on the chair in the background. More records scattered on the floor. I don't know what the toy train engine means, but it seems to be in the same color pattern as the jester's motley.

Misplaced Childhood was their third album. The cleanest of the three visually. The chameleon is now trapped in a cage, the magpie is holding the key. The Jester escapes through a window, perhaps to chase another rainbow. A young boy holds a now tamed magpie on his wrist, his heart worn on his shirt, glaring defiantly at the world.

Eventually I will get around to commenting on the music on these and other Marillion albums, but this post was only about the album art and it will do for now.
Posted by AlanDP at 2:25 PM