First: WARNING. Some of these pictures might be considered spoilers, and at least one of them may not be suitable for all viewers. So I'm trying a hack to make this an expandable post. We'll see if it works.

I think I have noticed a pattern when it comes to when Alucard's eyes are shown. Under "normal" circumstances, when he is in the company of, or speaking to someone toward whom he has no ill intentions, we see only his shades. When we see his eyes through his shades, violence is about to begin. If we see his eyes without the shades at all, he is probably in the process or killing, or at least fighting, someone. 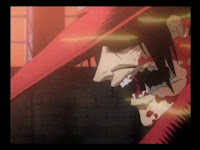 First, here is a close-up of his face being ripped apart by bullets. This is always very irritating. 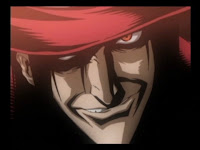 No shades. He is in the process of fighting the vampire priest in the first episode. 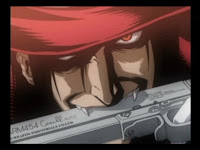 Here he is moments later, after inserting a fresh magazine into his pistol, he racks the slide with his teeth. This is not a recommended procedure unless you are a vampire with superhuman strength. 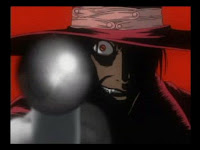 Unshaded eyes in the middle of a fight. That blurry sphere on the left is the bullet exiting from the barrel of his pistol. 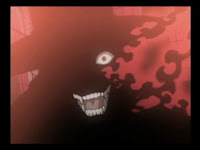 After being terribly shot up by a horde of ghouls, he reforms into one of his feral, or monstrous forms. The shades are nowhere to be seen and we get a good look at a single, maniacal eye. 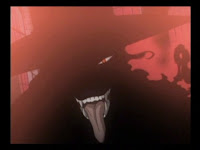 Moments later, he appears to be enjoying himself and this totally freaks out the vampire priest.

In the next installment, we'll take a look at some close-ups of Integra Hellsing.