1985. D&D was so popular you could buy polyhedron dice at 7-11 at the same time you picked up your daily 2-liter Mountain Dew. The Dragonlance saga was in full swing--no wait, maybe that came a little later. It doesn't matter, because the same people who thought Dragonlance was great fantasy literature probably also thought this was great music. [Click on all graphics for much larger versions.] 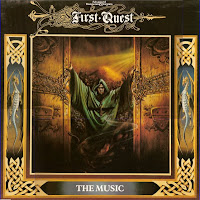 I mentioned Dragonlance because the artwork for the album was obviously done by the same person who did the cover art for those books. Oh, here it is: Jeff Easley. Okay, apparently some people got together and had this wonderful idea to make an AD&D adventure and put music to it!!! 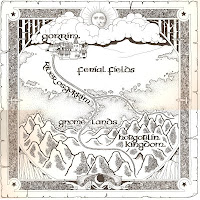 Starting in the land of Gorrim, our band of brave adventurers journey through the Fenial Fields into the Gnome Lands...

By the way, is there any PC race more worthless than the Gnome? Once I played a one-off game in which the DM said that somebody needed to play an illusionist (for some reason I've forgotten) so I said, "Okay, I'll do it, but only if I can play a Gnome illusionist/thief." I kept that character sheet along with all the notes I'd collected during the game for years, just so I could prove that someone, somewhere had been stupid enough (myself, in this case) to actually play a Gnome illusionist/thief. But I digress.

And then our brave adventurers travel through the Hobgoblin Kingdom, encountering a minimum of 250 Hobgoblins along the way. Yes, I said two hundred fifty. 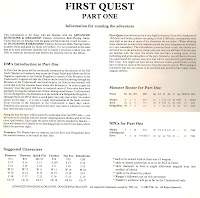 Go ahead and click that last graphic and take a look at some of it. Note especially the suggested characters at lower left. A 15th level Paladin?! Ye gads. 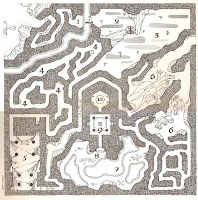 And eventually, if our brave adventurers survive that horde of a minimum of 250 Hobgoblins, they come to the dungeon part, where lurks a minimum of 2 red dragons, a lich and his horde of undead, various and sundry assorted demons and daemons, spiders (gigantic) and Charon. 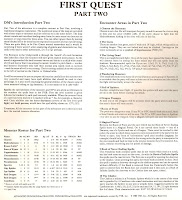 And here are the notes for the dungeon part. Go ahead and click. It is inevitable that eventually, some crazed Googler will come across this and want all these details, so I uploaded large versions that you should be able to print and use.

I almost forgot about the music. The music on this album is all instrumental and electronic. I like electronic music, but this is not particularly good electronic music. It's not especially bad, though. At best, I would say it's especially mediocre. It is intended to provide atmosphere for the various parts of the adventure, and here is the full track list.

Record 1, Side 1:
The Quest Begins
The Bloodguard (everyone who has read The Chronicles of Thomas Covenant may now feel free to sigh heavily in exasperation)
Elves
The Sorcerer's Apprentice (you may sigh again now, if it helps)
The Caravan
The Heroes Ride Out

Record 1, Side 2:
Gnomes
Hobgoblins
The River of Souls
The Gates of Hell

Record 2, Side 1:
The Living Dead (the same music as from the Living Dead movies)
Wandering Monsters
The Hall of Spiders
The Dragon Passages
The Room of Pools

Record 2, Side 2:
The Lost Caves
In the Sorcerer's Cave
The Summoning
The Crystal Chalice
The Return of Light
The Aftermath

The purpose of the game is to find the Crystal Chalice, which must be used somehow to defeat the "old gods," who are apparently the enemy (aren't they always?).

The best thing about the album are the brief bits of narration, which takes place between the musical tracks to move the story along, and was provided by the great Valentine Dyall, who has one of the greatest evil voices of all time. And to me, he will always be the Black Guardian from the Key to Time series during the Tom Baker era of Doctor Who. He passed away not long after recording this narration. It must have been one of the last things he ever did.

I bought this new and played it one time, to record it on cassette, so the vinyl is still in at least very good condition. Total running time is about 78 minutes, minus the narration, which probably adds only about 2 or 3 minutes more.

The musicians who made this album are still around, I think. I can't find much of any information on this album as a whole anywhere on the internet, but Googling their names individually turns up some stuff. The musicians are: Phil Thornton, Denis Haines, Dave Miller, Steve Parsons, Barrie Guard and G.P. Hall. The tracks are mostly the work of one of them working solo, although there are a couple of tracks in which Thornton and Miller worked together.

One of the few things that I did find on this album is that it is "quite rare," but I have no idea if it's really worth anything. If you chance across one and you're a D&Der, or you used to be, it might be nice to have as a curiosity, but I wouldn't recommend buying it just for the music.

UPDATE: I am slowly working on uploading some of these tracks to YouTube. You can hear them by going to my YouTube channel and looking through the video list.
Posted by AlanDP at 7:55 PM