One last collection of very tight close-ups of Alucard from the first episode, all but one from the final fight scene in which he is no longer wearing his shades. Warning: spoilers ahead. 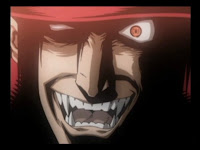 In confronting the vampire priest, Alucard castigates him for being neither human nor a real vampire, but one of the artificially created freaks. Alucard seems to have an almost racist hatred for the freaks. I had said before that I thought I had found a pattern in that he is shown without his shades only during combat, but I was wrong. He sometimes appears without them when conversing with someone whom he implicity trusts: Integra Hellsing. But under most circumstances, if he isn't wearing the shades, prepare for blood to flow. 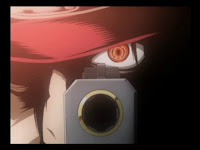 Here he is aiming his pistol at the vampire priest. I don't feel like going back to look at all the pictures now, but it seems to me that we never see his right eye, only his left. The right eye is always hidden by his hat, or his hair, or something. The exception to this is a few times when he was alone with Integra. It is only then that he appears without shades and we see both his eyes, the expression on his face almost friendly. I'll try to find a shot like this later on. 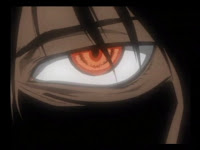 A very tight zoom on a single eye (his left), just before he shoots the vampire priest and Seras. 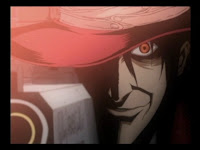 Once again, left eye only. He is making eye contact with Seras at this point. 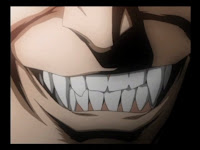 Another very tight zoom on his very feral grin. 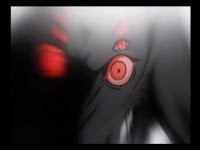 To finish, here is a tight zoom on the face of one of his monstrous forms: an eight-eyed dog. Again, only the left eye is clear. The right one is exposed but blurred. This shot is from the opening theme, we never see it during any actual episodes, although he does sometimes assume another monstrous form that is vaguely dog-like.

In the next and final installment (so far), I'll take a look at some close-ups of weapons and weapon-related items.