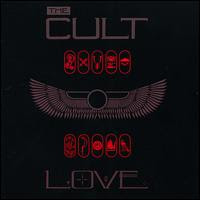 I'm sure this one is familiar to just about everyone. I don't remember why I bought it, because it wasn't the kind of thing you would hear on any of the radio stations around here, but I know I got it at Hastings. I really liked it back then, but hadn't heard it for years until I ripped it recently.

Way back when, I even hunted down one of their earliest albums (I'll get to it later) to get a feel for their history. Later I bought their Electric on CD but was disappointed with it; somewhere along the way, they had lost something.

This album was apparently quite popular with the goth crowd, although I didn't know it at the time I bought it. I guess I do empathize with much of the goth philosophy, I just never felt the need to die my hair black.

Ripping results: One skip on "Revolution." I gave the record a close examination and it appears to be a manufacturing defect that left a tiny bump in the vinyl.

Favorites: I like the whole album but special favorites are "Brother Wolf, Sister Moon" and "Black Angel." I even wrote a song of my own many years ago that was inspired by/ripped off from "Black Angel."