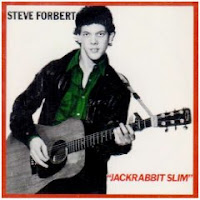 I've always enjoyed the heck out of this record, but Forbert isn't the kind of artist who you can easily find in stores (usual qualifer: not around here, not when I used to frequent record stores). This is another one that I bought at a place that sold used books & records. I think at the time that I bought it, I had only a vague memory of having heard of him, when I listened to it the first time, "Romeo's Tune" rang a bell, but not a very loud one. Forbert is another artist whose work treads the sometimes-gray-zone that we now call Americana, but I don't think anyone had thought of that designation in 1979.

But before I listened to it, I didn't know what to expect. I bought it because it looked interesting. The cover photo of just some regular-looking guy with a guitar (he looks like about 15 years old to my eyes--he was actually 24 when it was released), the back cover crudely "photoshopped" image of Forbert herding cows while riding a giant jackrabbit, and the list of song titles on the back cover all contributed to my decision, I guess. Also it was used, so I didn't pay much for it.

Forbert has a sort of hoarse tenor voice. His voice and his songwriting talents have brought him comparisons to Bob Dylan, however, he sings much better than Dylan ever did (for whatever that's worth). If you enjoy that kind of music that is not quite country and not quite rock, you will probably like this album.

Favorites of mine are "Romeo's Tune," which reached #11 on the Billboard Hot 100 chart in 1980, and "Complications." But I like the whole album and will sing along with any song on the record. Forbert has an extensive discography and is still active today. His latest album was released March 31 of this year. Jackrabbit Slim still has a fairly high Amazon rank, in the 22,000's. Amazon has song samples of the full album. One commenter there says that it was recorded with no overdubs. It does have that sort of feel.