A bunch of stuff you never wanted to know...

...about this kind of thing.

I spent my cross-training day yesterday in the meter shop, where they evaluate, test and repair meters that are supposed to be bad. Some of it was quite interesting, but there were stretches of extreme tedium.

Every morning someone brings in a load of meters that were pulled the previous day. Some days it's only a few. Yesterday there were over 100.

I worked only on the smaller residential meters, which were I think were all 5/8-inch, but the test bank pictured below also does 3/4" and 1". There were a few that were bigger than that (2" and 3") but I didn't work on them, and they go on a different test bank. Four-inch and larger are tested in the field, and I didn't have time to go out and do any of that. So everything I say pertains only to the smaller meters.

First of all, there are certain brands of meters which are automatically junked because they were all installed more than 15 years ago. There is an "expiration date" of 15 years, or 1200 cubic feet, whichever comes first. There are thousands (probably) of meters out there that are technically expired, but they won't be removed unless they obviously go bad or the customers complains (for example, I noticed one that I read today had more than 8000 cubic feet on it). There are only two models of small meters currently being used; one of them has a serial number which gives you the year of manufacture, so with a glance you can tell if they are auto-junk or not. The other model started use less than 15 years ago and are all candidates for repair. The junked ones are recycled elsewhere.

We had 26 that weren't automatically junked. The first step in the testing process is to squirt some water into each one from a hose and see if it runs. If it does, it goes back on the cart. If it doesn't, it goes on the repair bench.

The register (the part that has the numbers you can see if you look into your meter box) almost never breaks, unless it has been smashed due to accident or vandalism. It can eventually wear out and get out of calibration, which is why there's that 15-year limit. The most common breakage occurs in the part you can't see, which is under the register. Below the register is a compartment that houses a small turbine that is made entirely out of plastic except for a magnetic disk. The bottom of the meter is unscrewed, you put in a new turbine, screw it back together, and that's it. Afterward I shot some compressed air into it to make sure the new turbine worked (if the meter moves, it works). The turbine is magnetically coupled to the register--there is no mechanical connection.

Once the repairs are made, all the meters are connected to this test bank. 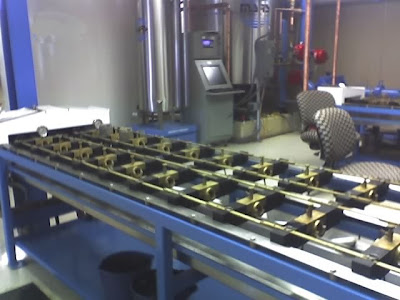 It can hold 24 meters at a time. You just drop them in there and use the compressed air to apply pressure to the entire bank so they are all squeezed into the openings you can see there so they don't leak. I didn't think to take a picture when it was full--I suddenly remembered I had a camera phone after it was over, so it's all empty. Anyway, this apparatus runs three different flow tests. First, a "high-flow" test that pumps 10 cubic feet of water through each meter at the rate of 15 gallons/minute. Second, a "medium-flow" test of 1 cubic foot at the rate of 2 gallons/minute. Finally, a "low-flow" test of 1 cubic foot at 1/4 gallon/minute. The entire procedure takes about an hour. The initial reads are taken and punched into the computer, then new reads are taken after each stage and punched into the computer again. Most meters that are starting to go wonky can pass the high and medium tests but will fail on the low test. In this case, we had two meters that appeared good at that first crude water hose test but failed the low test and went back to the repair bench. One of them I expected to fail because it didn't look right when I first squirted water into it. I even asked the guy who was training me if he was really going to call it good because of the way it moved. He put an "X" on it so we didn't lose track of it, and sure enough, it failed.

By the way, this system is entirely self-contained and the water is recirculated. 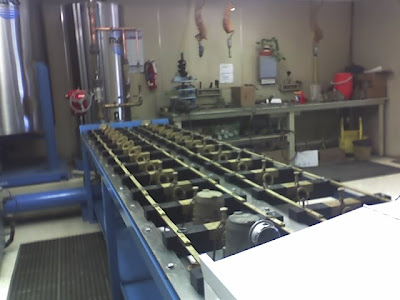 This picture is from the other end. You can see two odd meters that were left over and have already been mounted. If there are only a few meters left over, they are usually left for the next day, but fewer than 12 can be tested by putting "blank" PVC pipes in place of meters. The bench in back where the pneumatic tools are hanging is the repair bench.

The next step is to put plastic caps on the in-flow and out-flow openings to keep dirt out, then they are taken to a bench grinder and the cap is buffed to make it easier to see the serial number and manufacturer name. Then they go in boxes so they can be taken back out into the field and installed wherever they need them.

And that's about it. Next time I'm required to do this, I hope to spend the whole day in the field so I can learn about testing the big meters. Staying all day in that one building was not exactly for me.
Posted by AlanDP at 3:23 PM