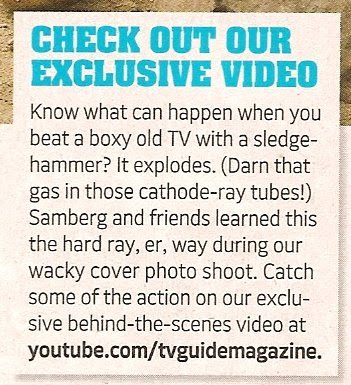 Found in TV Guide. "We only write about it--we don't have even the most basic understanding of how it works." Here's a hint, TVG folks: there may be a good reason that it's also called a vacuum tube.

The week so far has been unusually hectic. This is the first night I've had both time and energy to sit at the computer and have a leisurely pipe. Yesterday, due to circumstances beyond my level of authority, responsibility and control (in other words, somebody above me in the chain of command screwed up, and I suffered for it), I was out there in the field until nearly 3:00 PM. And I started at 7:00 AM. Fortunately I had had the foresight to break out the CamelBak so I didn't get dehydrated. It gets really hot out there after about one o'clock. Monday is always busy because that's Girl Scout night.

Well, anyway, on Saturday night I actually posted another installment over at Nightgaunt's Realm, but after a couple of hours I decided it needed a lot more work so I took it down.

I have several albums that I could write about, but I'm just sort of concentrating on doing nothing right now. I did forget to mention, in the post about The Wall, an interesting website that I came across while noodling around the internet on Pink Floydian topics. Pink Floyd The Wall: A Complete Analysis. I'm not recommending it, because I know it's a little too in-depth for everyone. I thought to myself several times while reading it, "these guys need to remember it's only rock & roll..." Yet still, I read it. Most of it. My eyes started to glaze over after a while. But then that was when I was still assuming some semblance of consciousness last night so the eyes-glazing may have just been exhaustion rather than boredom.

I have been downloading a lot of free mp3s from Amazon and I have a big backlog of stuff I need to listen to. I've kind of slowed down on the Twitter list of albums I'm converting because The Wall took a lot of time and work. I'm about to start working through a bunch of Yes albums and a few other assorted things. But I'm thinking I might put all those aside for a few days so I can convert all my Triumph records. It's been a long time since I've heard any of them.
Posted by AlanDP at 6:28 PM