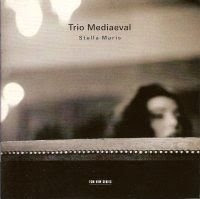 I'm going to try and pick out an album every weekend that I think may be more interesting than the usual, and follow a more intentional method than my usual somewhat haphazard approach. Here is something that is still fairly new to me. I came across it while browsing at yourmusic.com and added it to my queue as soon as I saw it.

Trio Mediaeval are a trio of Norwegian women who sing ancient music that has been arranged for three-part female vocal harmony. No instrumentation--only the women singing.

Stella Maris is the second of their four albums, according to the discography on their official website. It has 12 tracks with a playing time of 65 minutes. The first seven tracks are authentic ancient music, from the 12th and 13th centuries and from both England and France. Tracks 8-12 are a contemporary composition in the style of the medieval mass written especially for Trio Mediaeval in 2005 by Korean composer Sungji Hong.

Their singing is precise and their harmonies are flawless. In fact it sounds more like one person singing with three voices than three individuals singing together. So if you like a capella women's vocals or medieval choral music you will like this.

Check out the official website at Trio Mediaeval. Amazon has sound samples of all tracks, and the album can be purchased either on CD or as an mp3 download. The CD booklet has extensive commentary on all tracks, as well as all the lyrics, which is helpful for someone such as myself who isn't very familiar with classical Latin (except for the odd necromantic spell or two).