The Bands and Ensembles of the US Armed Forces: Veterans Day Honor 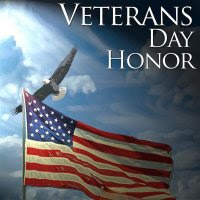 This is a free mp3 album that Amazon.com released this past Veterans Day and which I have only today gotten around to downloading and listening to.

I am not usually given to listening to patriotic music for entertainment, so I doubt if this will go in my main mp3 directory, but it's still a keeper.

The only bad points of this album, to me, are tracks number 7 & 10, which are not traditional patriotic pieces but more modern patriotic pop songs which completely fail to stir my soul. But of course ymmv.

Big plus points for introducing me to the stirring and evocative hymn "Eternal Father, Strong to Save," which I have learned is the U.S. Navy Hymn.

I am most impressed by the impeccable tightness and precision achieved by all these bands.

Side note: I looked "Eternal Father" up in the hymnal which we currently use at my home congregation. It has four stanzas, the original two of which (modern stanzas 1 & 4) were written in 1860 by William Whiting. It was set to music the following year by John Bacchus Dykes. In 1937 Robert Nelson Spencer added two more stanzas in between the original two. Although none of the branches of the armed forces are mentioned by name, the pattern of the stanzas is clear: stanza 1 refers to those on the sea, stanza 2 refers to those on the ground, and stanza 3 refers to those in the air. Stanza 4 is all-inclusive to wrap it all up. The hymn as a whole is a prayer song for the armed forces.

Of course I have already begun teaching it to myself but it has some unusual harmony that would probably challenge most amateur congregational singers (among whom I include myself). There is a modulation for a few bars to the 3rd of the scale (from C major to E minor), which is not something that most of us are used to hearing, so it would probably take some practice to get right. Still, I've put it on my learning list.