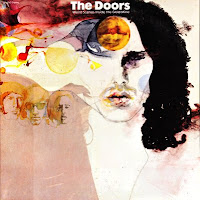 I think the reason that I have some of the old out-of-print albums is because I was dancing around the fire trying to satisfy my curiosity with various compilation albums; eventually I gave up and just started buying everything.

This was an easy rip because there are only two songs on here that aren't redundant with all the CDs I bought later on: "Who Scared You" and "(You Need Meat) Don't Go No Further," that latter of which is sung by Ray Manzarek instead of Jim Morrison. Other than that, this album will just sit on the shelf as an out-of-print curiosity alongside that "Best of" album that was made for the quadraphonic system and that first "Greatest Hits" album. I never got 13.