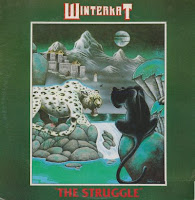 This is one that doesn't have a Wikipedia entry and very little is to be found about them anywhere on the web that I can discern. They were from the San Antonio area, their correspondence address was a place on Blanco Road, and the album was recorded in Dallas. For a long time I thought this was the only thing they recorded but in poking around recently I did manage to discover that this was their second album, the first being eponymously titled and having similar though not identical cover art. Both records are short EPs; this one has a total playing time of around 17 minutes.

The music is good 80s pomp rock. There are three original songs, plus a cover of Hendrix's "Little Wing" and an obligatory 50-second Bach minuet. They sound like they were heavily influenced by Triumph. The problem with this record is the mixing. I'm not a professional sound engineer, or even an amateur one, but $#@! this sounds bad. The drums & bass completely drown out the singer; he sounds like he's singing from the back of the room. In many places they even muddy up the lead guitar, and I'm pretty sure that's not supposed to happen. On occasion there are harmony vocals, and the harmony just leaps out but as soon as it's back to the lead singer alone, he's banished to the back of the room once again.

Also, this is an album that I didn't buy in a record store. They probably weren't big enough to go through normal distribution channels, so they took records to various music stores. I bought this one at Stage Door Music in Seguin, which was a store that sold instruments, not albums.

So is it worth anything? I don't know. Some guy on Amazon is trying to sell what I think is their first album but his listing is so vague that I don't know for sure, asking $60 for a used one and I think he's living in a fantasy world. Rockadrome has their first one still sealed in the jacket for $35. AOR FM has some further information on it, but their listing is for a reissue with extra tracks--the one I have is the original issue with only 5 tracks. The SA ROCKS Blog has a video. If you snoop around enough you'll be able to find places where you can download this and their other album.

The rip was pretty close to perfect. And by the way I got a new scanner today and it's working great. This was the first album cover I scanned with it. It's a Canon LiDE 100.
Posted by AlanDP at 8:11 PM