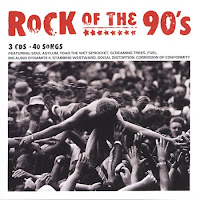 Okay, I take back what I said about the 90s. There was some good stuff that came out of that decade. Not all of it is on this CD.

This is another disc that came in a ziplock bag from a yard sale. I like most of the songs on it, and some of them will make it to my favorites list. Here's a track list.

1. Soul Asylum - "Runaway Train"
I really like this song. I've heard it before, of course, but never really paid attention to it--it was just something on a pop/rock station to keep me from going to sleep on the drive home. Now that I've sat here and listened to it a few times with no distractions, it has become one of those songs that hits me in the gut and I should have paid better attention to it before. It has a very mournful quality that I always like in a song.

2. Toad the Wet Sprocket - "Walk On the Ocean"
Already on my favorites list. I have this and several other of their albums.

3. Ben Folds Five - "Brick"
I have nothing against this song. It's okay, but so far it doesn't hit me in the way that would get it on my favorites list.

4. Spin Doctors - "Two Princesses"
I can't frikkin' stand this song. This is one of the most monotonous excuses for a pop/rock song I have ever heard. I feel so bad for them because they sound like they put so much enthusiasm into it and it still came out sounding like something a 5th grader would write. It's deleted.

5. Tal Bachman - "She's So High"
This one I had never heard before, and it's another one that I really like. Favorite.

6. Shawn Mullins - "Lullaby"
Not sure if I heard this one before or not. Sounds vaguely familiar and another one for the favorites list.

7. Chris Whitley - "Big Sky Country"
I've heard this one before, although I didn't know anything about the singer until I just now looked him up. He passed away just a few years ago at the young age of 45. Worth putting on the general favorites list.

8. October Project - "Ariel"
This song doesn't even sound like it belongs on this CD. When I think back on the radio stations that played these kinds of songs back in the 90s--and I heard that kind of station a lot because that's what everyone listened to where I worked back then--I can't even imagine this song getting played. I like it and it will also go on the favorites list.

9. Sponge - "Molly (Sixteen Candles)"
Okay. I won't delete it but it won't go on the favorites list, probably.

11. Henry Lee Summer - "Till Somebody Loves"
Looked him up. Most of his hits were in the 80s, and this song sounds like an 80s song even though it hit the charts in '91. It's okay.

12. Firehouse - "All She Wrote"
And here the disc begins to rapidly spiral down the toilet. Another one that sounds like it's from the wrong decade. It sounds like just another 80s glam band to me. Deleted.