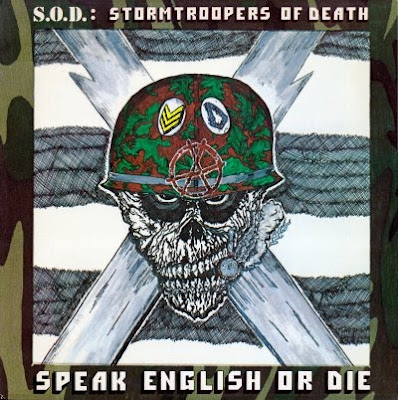 I bought this one right away upon first seeing it just because it looked so ridiculous and I assumed was made mostly for laughs and to offend people. As far as I can tell, I was right.

The uh...music? is something called crossover thrash (or hardcore thrash), that is, a crossover between thrash metal and hardcore punk. If you're wondering what the difference is, I'm not the one to tell you. You'll have to find someone whose ears are more closely attuned to the subtle genre variations to explain that one to you. However, I can quote Wikipedia.

Thrash metal is a subgenre of heavy metal that is characterized usually by its fast tempo and aggression. Songs of the genre typically use fast percussive and low-register guitar riffs, overlaid with shredding-style lead work. Lyrics of thrash metal songs often deal with social issues using direct and denunciatory language, an approach which partially overlaps with the hardcore genre. The "Big Four" bands of thrash metal are Anthrax, Megadeth, Metallica and Slayer*, who simultaneously created and popularized the genre in the early 1980s.

Hardcore punk is an underground music genre that originated in the late 1970s, following the mainstream success of punk rock. Hardcore is generally faster, thicker, and heavier than earlier punk rock. The origin of the term hardcore punk is uncertain. The Vancouver-based band D.O.A. may have helped to popularize the term with the title of their 1981 album, Hardcore '81.

I hope that cleared things up.

Anyway, the original LP is made up of 21 tracks that pound with the subtle insistency of a dead-blow mallet. Some are astute commentaries on politics and the world such as "Speak English or Die" and "F*ck the Middle East" (asterisk not in original). Other songs tell the troubles of the workaday man (or woman): "Kill Yourself," "Pre-Menstrual Princess Blues" and "P*ssy Whipped" (once again, asterisk not in original but I am trying to avoid certain word searches if you know what I mean and I think you do). There are couple of instrumentals that would make Bach wish he could shred if he had lived to hear them: "March of the S.O.D." and "Chromatic Death," the latter of which is 42 seconds of sheer sonic catastrophic brilliance; and finally, heartfelt ballads which are sure to bring a tear to your eye but which are not on contemporary CD releases of the album: "The Ballad of Jimi Hendrix" and Joan Baez's "Diamonds and Rust." And, as they say on TV, many more.

P.S. I hope no one thought I was being serious when I wrote this.

*I can say that to my own ears, Metallica and Slayer sound nothing alike.
Posted by AlanDP at 8:41 PM