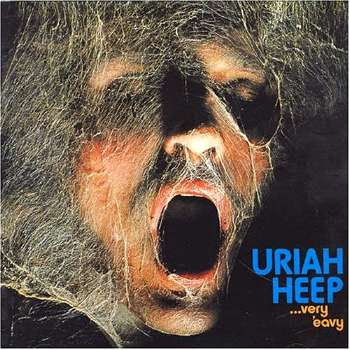 I took a break from this for a while, but I'm getting back into it now, slowly. Here's one that I had previously ripped from a dupe tape, and this time ripped it straight from the vinyl.

I became sort of a big fan of Uriah Heep back in the 80s, but mostly of the albums Demons & Wizards and The Magician's Birthday. I already had both of those, and I think Return to Fantasy before I bought this one. This was their first album, released in 1970. The above graphic is one that I snatched from Wikipedia, which is what the original cover looked like. My cover looks like the one below: 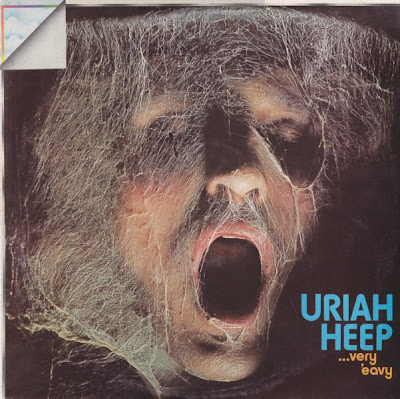 It has that little faux page-turn in the upper left corner. The original was a gatefold cover. Mine is a 1971 Italian reprint that is just a standard jacket, no gatefold. This album was released in the U.S. as Uriah Heep with a completely different cover. See the Wikipedia entry if you want to see what it looked like. Also the U.S. release had one different track from the rest-of-the-world release, which you can also read about at the link. I don't think I've ever actually seen that cover anywhere except online. Mine has the original U.K. track list.

So anyway I listened to this a lot, too, and it has a few tracks that I would add to my general favorites list. I have a couple of latter-day (post-David Byron) albums of theirs, but they don't grab me like the old ones did.

This is one of those groups that Rolling Stone always hated. One critic famously said, upon the release of this (their first) album, that she'd have to commit suicide if "this band makes it," or some such stupid thing (I hope you passed away peacefully and painlessly, Melissa). I had already learned by this time that if they hated a group, it was worth checking out.* Although they had only what I guess we would have to call "minor success" in the U.S., they were and still are quite popular elsewhere. According to Wikipedia, they were the first western band to play in Soviet Russia after the introduction of glasnost. The current Heep lineup has only one original member, guitarist Mick Box.

This is one of those records that I recorded to cassette the first time I played it, and thereafter listened only to the cassette. So this is only the second time I've played the vinyl, and got a perfect rip after cleaning out 2 or 3 very minor pops.


Sound samples available at Amazon, and I'm sure you can find it on YouTube as well. I would suggest giving "Gypsy" and "Dreammare" a try.

*However, they were totally right about Black Oak Arkansas.
Posted by AlanDP at 7:33 PM