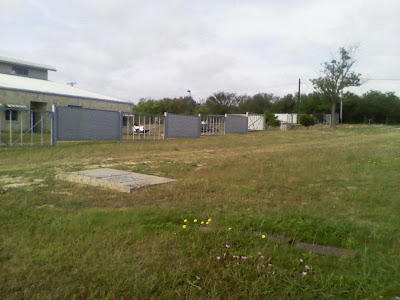 A peaceful scene at the "intersection" of Wurzbach Parkway and Tool Yard, off in the grass slightly to the lower left of that purple dot below. 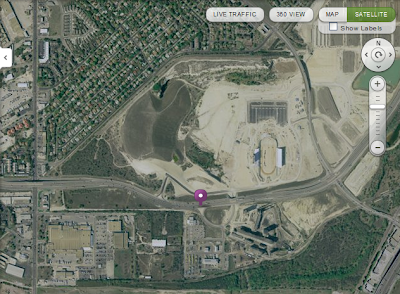 From the time I first started doing this route, which was about 6 months after I was initially hired, up until about a year and a half ago, there was only one meter in this spot. Or so we all thought. This meter: 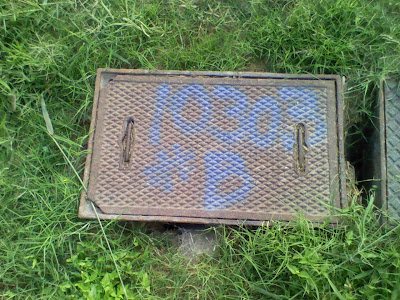 Yes, I realize the meter is not actually on Perrin Beitel. As I have come to understand, the location of a meter and its address are sometimes largely unrelated and irrelevant.

The old address of this meter was something on Wurzbach Pkwy. I don't remember the number. But then one day, like I said about 18 months ago, a new meter turned up; a large meter that was most likely in a vault because of its size, with the address 10303 #A Perrin Beitel. It was what we call a "niner."

So if you'll allow a brief digression, I'll explain the "niner" term. The meters on a route are all numbered from 1 to however many there are on the route. The numbering sequence begins with 000100, which is sequence 1. The two trailing zeros to the right of the 1 are so we can renumber the sequence and have plenty of room to shift sequences around, based on what we think is best. So for example if I had a meter that was at the wrong sequence, and I wanted to stick it between meters 1 & 2, I would change its sequence to 000101 or anything else that fell between 000100 and 000200. The next month, that meter would be changed to sequence 2, or 000200. The old sequence 2 would become sequence 3, or 000300. When an all new meter is added to a route, it is given a sequence of 999999. This puts it at the end of the route and makes it easy for us to check if we have any new meters. We just skip to the end and see how many "niners" we have, and as we work the route we change them to the proper sequence so they will be in the right place next time.

So this niner turned up at 10303 #A Perrin Beitel. The trouble was, there was nothing at that address. As far as I and my co-worker at the time could tell, there was no such address. So we just put a trouble code 53 on it (technically meaning "the meter is covered" but generally used as an excuse for "we can't find it") and kept ignoring it. That guy transferred to another department and I was left "in charge" of the route, so I determined to find it.

At the time, the athletic park across the way was still under construction, and we assumed we would be getting the new meters for that place. Therefore, we assumed our new meter was over there, with one of those nonsensical addresses. I drove all over that place and never found it. If you'll refer to that map at the top of the post, you'll see what's left of an abandoned street that runs roughly parallel to Wurzbach Pkwy on the south side of that road. I drove all the way up that street as well--a street that now leads to nowhere since Wurzbach Pkwy chopped it in two, and still couldn't find the meter.

I asked for measurements to tell me exactly where this meter was. The problem is, the vast majority of new meters are never measured (not anymore). Likewise, there was no map of the meter, either. The only thing I was told is, "It's right there." Well, I told them, that's just not good enough. Then they told me the customer was listed as "The City of San Antonio, so I should look for a park or something." This information, it turned out, was incorrect and completely worthless. 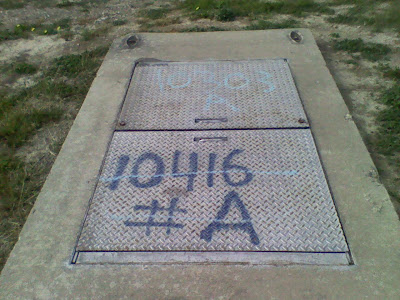 "You gotta be kidding," I thought, although I knew they weren't. The meter I had been looking for had been literally right under my feet. Here's the kicker: it wasn't a new meter. It should not have been a niner. The only reason it was a niner is because it had never been on a route before. How long was it there without ever being read? I have no idea, but I can vouch for at least 18 months. Before that, I can only assume it had been there for years, a forgotten meter, using water, never being read. You may wonder why I had never thought to look in that vault. Good question. The truth is, there are empty vaults all over the place and another empty one wasn't unusual enough to spark any curiosity. Plus, the address on Perrin Beitel didn't have anything to do with the actual location.

And then a couple of months after that, I arrived at said spot to find that both meters had had another address change, to 10416 #s A & B Tool Yard, which is the site of the CPS Northeast Service Center.

This isn't the only stupid lost meter trick I have encountered, but it's certainly the best example of such. So if I ever mention a "lost" or "forgotten" meter, this is the kind of thing I mean.
Posted by AlanDP at 9:33 PM