I'll be in my bunk 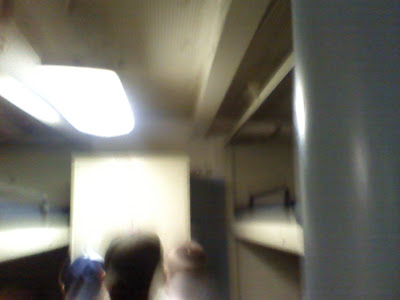 Not a good pic, but it's one of the few I tried to take with my phone--I took more with a real camera which will have to wait until I get the roll developed, but anyway, that shelf on the right was my berth.

My only complaint is that my back hurt a little in the morning, but I walked it off as soon as I got up. This weekend my son and I went on a "live aboard" exercise on the U.S.S. Lexington with his Cub Scout pack. This was my third time on the Lexington (his second), the second time in two years (my first time was in the early 90s), but our first time spending the night there. It was fun, and other than having a mattress without extra lumbar support, I actually liked the bunk. I think next time--if there is a next time--I'll take on one the floor so I can get out during the night without worrying about stepping on someone. I woke up at 5:30 this morning and laid there waiting until 6:45 for reveille.

Our berth was on the starboard side of the foc'sle (that's how they abbreviated it on the signs--I'm not sure if that's a completely correct spelling), that is, to the right of the theater.

I overheard someone from another group asking his pals what a "foc'sle" was, so I broke in and told him. Ye gads, man, I thought, didn't you ever read any pirate stories when you were a kid?

Anyway, they fed us supper and breakfast and we got to wander around all over the ship after dark when all the touristas had been run off, so it was pretty cool.

No ghosts. None that I could see, anyway.
Posted by AlanDP at 10:11 PM