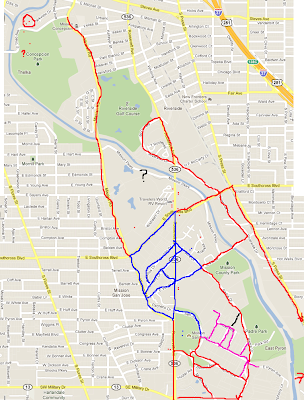 Here's another one that I mention often, my regular cycle 17. This is actually two routes, but the other one is much farther south and is much more of a routine, mostly foot route that ends near the "haunted" tracks. It has something over 300 meters and takes 2 people about 1 1/2 hours. No big deal. This one, before we all had company trucks, took two people about 4 hours, one driving and one on foot. Now that we all have company trucks, it takes 2 people about 3 hours, and has around 400 meters.

All the stuff in red is what I usually do, driving. All the stuff in blue is what the other guy used to do on foot and now does driving. The purple stuff is where we finish up and we usually meet each other somewhere back there.

I didn't get enough on this map once again. I even took two screen shots so I could stitch them together and I still didn't get all of it. It also includes Military between Roosevelt and S. Presa and some stuff on S. Presa that's off the map, like the state hospital and some others that I don't know what they go to. They're just there, using water for something, but I don't know what.

The question mark at the upper left is the newest "lost" meter that's supposed to still be there but if it is, I can't find it. The three circled dots up there are meters that have been removed but are still on the route.

The black question mark is there because Mission Parkway doesn't actually exist here yet. I suppose it will eventually, and I'm sure it will have some irrigation meters because they want to make it look all nice and pretty for the tourists. The other black street doesn't exist, either, and I don't know if it ever will. It's just there on the map for some reason. I read somewhere once that map companies will put intentional mistakes on their maps so that they can tell if someone ripped it off for copyright protection. This might be the designated mistake for this area.

Dots are spread around for some other meters that I just added in for interest. I made one mistake. The red dot near the intersection of Mission and Southcross should be blue; the other gets that in the corner of the golf course by climbing the fence.

Another mistake I made is at the lower right corner. The purple should extend all the way down Pyron to the end of Symphony.

I actually kind of enjoy this route. The only bad traffic is on Military; everything else is fairly easy and pretty quiet.

I expect this route to come up this coming week. I should also be doing cycle 15, which I usually take some pictures on because it seems most prone to having something worth photographing. I'll see if I can draw a map of it later, but it's just kind of a spread-out foot route so it doesn't cover that much area.

You might look at this and wonder why we do it the way we do. Well, we're just kind of stuck with it the way someone set it up a long time ago. To be resequenced, one person would have to do it alone, and the powers that be aren't really interested in slowing things down enough for one person to take the time to do that.