We had a little outing today.  We went to Marcelina Baptist Church, a small place out in the country between Floresville and Stockdale, to celebrate my great-aunt's birthday.  She will turn 100 next Thursday.  There is a cemetery on the same grounds as the church building.  I've been there before, and it's a place I've always liked, but then I tend to like cemeteries anyway.  I have several relatives and ancestors buried here.  This is the place where my great-grandmother on my dad's side is buried, but the exact location has been lost.  Back in the olden days, they didn't keep exacting records of where all the burial sites were, and of course, back in those days a lot of people couldn't afford to put big, heavy marble markers on the sites.  Anyway, one day a tornado ripped through here and destroyed/displaced some of the less heavy markers, and that's why my great-grandmother's exact burial site is unknown.  My dad remembers the approximate area from when he was a kid, and showed me where it was as he remembered.  So I know that much, but that's all.  When I was a kid, 4 to 6 years old, my family lived in the Marcelina area not far from this place.  I'm going to be posting these to my Wordpress site in the coming days, one at a time, but without much comment.  I thought I'd post the whole set here because it's of personal interest to me.  You can click on these images to go to my flickr site where you can see larger versions. 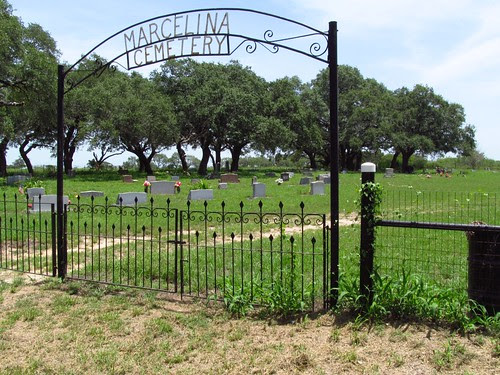 This is just the front gate.  It's never locked. 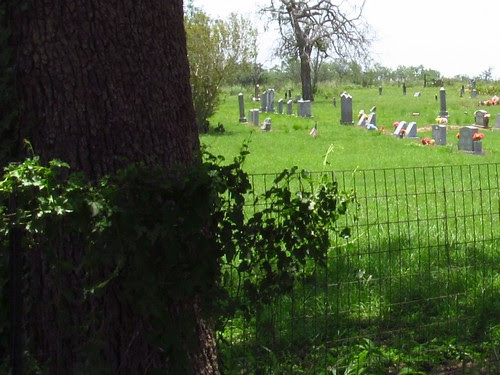 This is one of the large live oak trees that grow in and around the cemetery.  I was trying to take a photo with the tree framing some of the markers, but I couldn't get it to come out the way I was imagining it.  Anyway, you can still get a good idea of the "rustic" nature of the place. 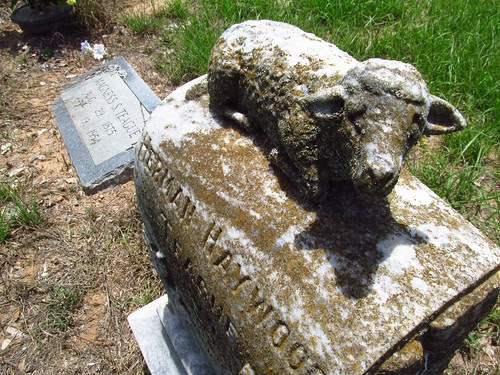 I didn't take any photos of my own relatives' markers because they tend not to be very picturesque.  This is a marker for a child who died in 1918 with the same last name as the stone in the background.  Based on the dates, it would be safe to assume that one of the boy's parents was later buried next to him (not sure if Magness is a male or female name).  This is one of the family areas.  There are spots like this where members of the family were buried next to each other, but they aren't always clearly defined. 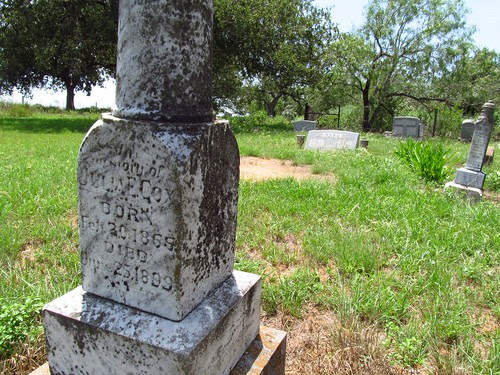 The shorter life spans of those who lived a century ago often sharply stand out when you begin reading the older markers.  This is one of the oldest, a marble marker for a woman who died in 1899 when she was 33 years old.  These old markers always make me ask the question:  Does she have any living relatives now who even know she is buried here?  There are no other markers nearby that might make one think she was buried in a family plot. 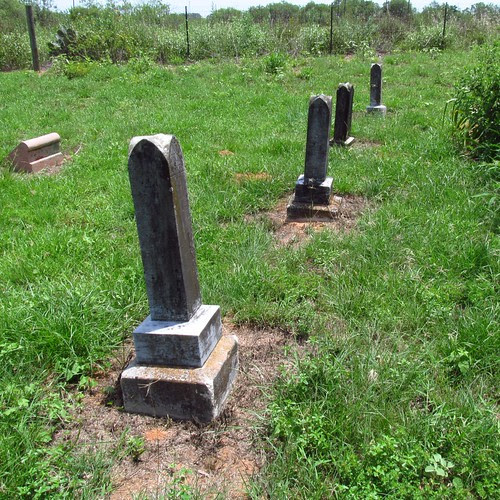 A line of old matching marble tombstones in one of the family areas, tilted this way and that. 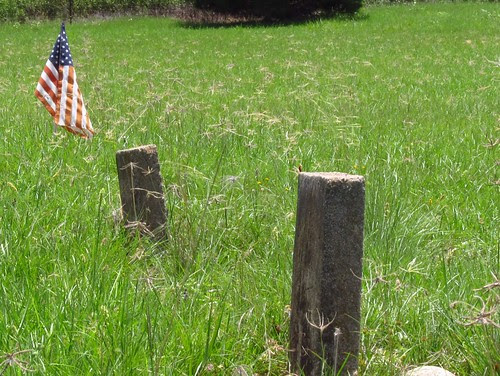 The flag here is a puzzle to me.  These are plain concrete markers for two children.  The one in the foreground was an infant who lived for only 6 days in 1922.  It looks like these markers were made by simply pouring a small concrete slab and then inscribing them with an awl or metal punch or some such object before they were completely dry.  My guess is that the flag may be for one of those misplaced grave sites; someone remembers about where someone's grave was and marked it with the flag.  The flag looks relatively new and is in good condition, so I think it must have been placed there not too long ago.
Posted by AlanDP at 8:20 PM