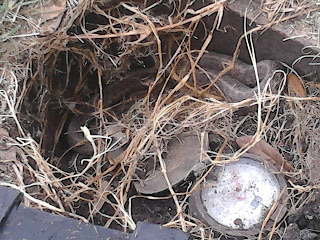 This is a checkered garter snake.  This was a snake I had never seen until I started this job; they just don't live out here in the sandhills where I grew up, although I have on rare occasions seen the Texas garter snake out here.

This one was unusual in that it had just begun the shedding process.  It had only its head clear and the rest of its body was still covered by the old skin.  I tried to get a good shot of its head, but it didn't cooperate with me.  So its coloration is usually more vivid than this.  It's so dull looking because that's all the old skin that it was about to get rid of.

I've seen dozens of these things hiding in meter boxes.  I'm not one of those people who is irrationally afraid of snakes, but I must say that I used the digital zoom on this one because he was really peeved at my uncovering him.  He zeroed in on me and kept pivoting around so that he could face me instead of just trying to get away like they usually do, and when I did finally flip the lid back on the box, it struck at my hook, which is a first for my encounters with this kind of snake.

The picture below was taken by accident because I touched the "take a picture" button before I meant to.  But it did get a good shot of my Roadrunner, one glove and hook.  I have to take off the glove to use my new phone because touch screens don't work with gloves.  The Roadrunner is soon to be gone; we are going to be getting new devices within the next few weeks.  They haven't told us which one yet, but I'm hoping for a model made by Itron.  It looks like this. 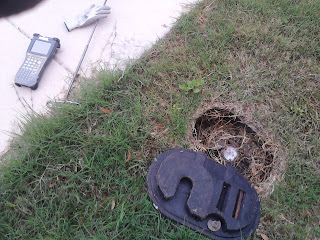