I don't believe it!

...as Victor Meldrew would say.

Today I had a meter route in the Oblate/McCullough/San Pedro area, not one of my favorite places to read meters (by Dagon, that was a horrific route!). However, it was very close to The Humidor, a place where I have in the past occasionally purchased pipe tobacco and other related accoutrements. After finishing, still pretty much covered with sweat and feeling exhausted, I dropped by and walked straight over to their pathetically small pipe section (most of the original was removed to make room for that beached whale of a cigar humidor that takes up 3/4 of their space) and told the guy working there:

"I'd like a tin of Escudo."
"What was that?" he said.
I thought maybe he had misunderstood me, so I tried a couple of different pronunciations.
"Escoodo...Eskewdo," I answered.
"Is that tobacco?" he asked.
I was dumbfounded. Incredulous. Flummoxed.
"Yeah! Pipe tobacco. Virginia and Perique."
"Never heard of that one," he said.
I started in utter disbelief and their small shelf of pipe tobaccos for a few seconds.
"You really don't have it?"
He just shook his head.
I can't believe it.

Several years ago this was a pretty good place to get pipes and tobacco. They at one time had a shelf of Irish Seconds that always made me drool. But since the cigar craze started long ago, they have all but abandoned pipe stuff. They did have a few lonely tins of various Dunhills there, and for a second I thought maybe I'd get one of those instead, but then I just said thanks and left. Unbelievable.

It really does exist. I just can't believe this guy had never heard of it.

What makes this really vexing is that I have bought this exact pipe tobacco at this very store in the past. 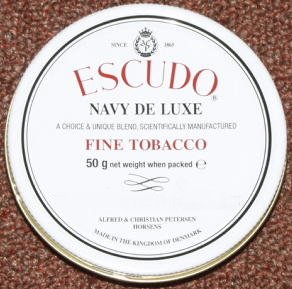