A firearm accessory which I recently purchased came with a brochure for United States Concealed Carry Association. According to their website, they are only about a year old (relatively new). Right at the top of their home page is everyone's favorite quote by Robert Heinlein, "An armed society is a polite society." There's a free weekly email report (membership not required), and their magazine costs $40 for 8 issues per year (but as with most subscriptions, there's a special offer to save money if you buy 3 years at once). Besides the magazine, members also get a quarterly email newsletter. They are also sponsoring a gun giveaway, the prize being a NAA Guardian in the caliber of your choice.

I had never heard of this organization before, but so far it looks pretty good, with their magazine focusing exclusively on concealed carry tactics and issues. 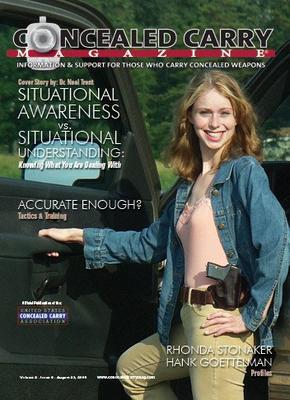 Each issue contains a profile of an individual person-on-the-street who has chosen to carry concealed, an article from the "woman's perspective," a gun review, gear review, and true stories of self defensive gun use, as well as other articles. The website has some sample articles available in pdf format. (I am having problems actually downloading them, which could be a problem on my end, so I can't comment on them right now. Maybe later).

Anyway, it looks like a interesting magazine and organization, and I thought I should mention it.

UPDATE: Here are some favorable comments I found at Packing.org. By the way, I think this is the first website I've ever visited that uses the .us domain. Not that it's significant. It's just that I knew this domain existed but I think this the first time I personally have ever seen it used.
Posted by AlanDP at 8:14 AM