If you were to look back in my archives for some reason, you would see that this is actually the anniversary of the founding of this blog. I don't consider it very highly, however, because at the time I was apparently bored and couldn't think of anything better to do. I didn't really get "serious" about it until March 2005. Here are some previous names of this blog:
The Complete Waste of Time Weblog
Farm Road 539
The Twyllyp Report
Flourishing in Obscurity

I still kind of like that last one, it seems the most accurate.

I don't have the money to buy a gun in celebration today (actually I do, but it's in a savings account and is untouchable except for a real emergency). However, I do plan on getting one when the income tax refund comes in in a couple months time. I have my heart set on a lever-action .357 magnum.

So here's a summary of that first day.

A post about E-Sword: Bible freeware that I use often.

A post making fun of Barbie & Ken versions of Aragorn and Arwen. (The link is no longer valid). 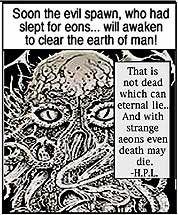 The last post was about Jack Chick tracts, which I still am both offended and amused by, although the amusement outweighs the offensiveness. There was also a link to a spoof of these tracts from a Cthulhuian perspective. The old link is no longer valid because some lawyers made the author remove it--it obviously violated copyrights. However, that is not dead which can always lie, and once released on the Internet nothing can die. A good link to the Cthulhu Chick Tract may be found here.
Posted by AlanDP at 5:05 PM