So much for "Leslie"

The headline says "Venezuela to ban stupid names." No. It should read: Venzuela to ban names that some socialist government bureaucrat thinks aren't socialist enough. But then it's from Metro UK so what should I expect?

Thinking of naming your baby Hersony, Nohemar - or even Superman?

Such odd names might be turned down by the civil registry if Venezuela approves a bill barring parents from giving their children 'names that expose them to ridicule, are extravagant or difficult to pronounce,' or that raise doubts about whether a child is a girl or a boy.

Nobody's business. Although I suppose if you name your kid Fire you can't take him into a crowded theater.

The new bill proposes to create a list of traditional names that could be offered to parents 'as a reference' to provide options when they are registering their child's birth. It says the list would have 'no fewer than 100 names' and would grow over time.

What most people don't know is that this is directly related to a traumatic odd-naming experience in Hugo Chavez' own past. 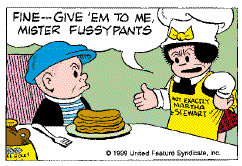 UPDATE: As of September 13, they have apparently changed their minds. The Venezuelan government is concerned about "the right to liberty?" Now that is odd.
Posted by AlanDP at 7:40 PM