I hate working on Saturday

There's a Halloween party tonight, mostly for the kids, but I let my wife take them. I'm just too burned out. Also I pulled a muscle in my back lifting a heavy meter lid. I guess I wasn't standing at the exactly the right angle or something.

So the comic I posted previous to this popped into my head today in between my sullen plottings about what I would do if I became supreme overlord of the multiverse. I thought it was funny.

Then we had to move a sofa today after I got home, and that didn't help a whole lot, but we have a new(er) sofa now. Played the Illinois Howl files for my dad and he says they're wolves. Maybe, maybe not.

But that put us on the topic of odd animals, and I learned that there have been increasingly frequent sightings of coatimundi in the area. 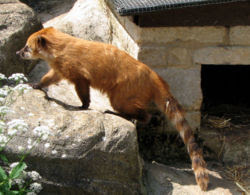