The first cut won't hurt at all... 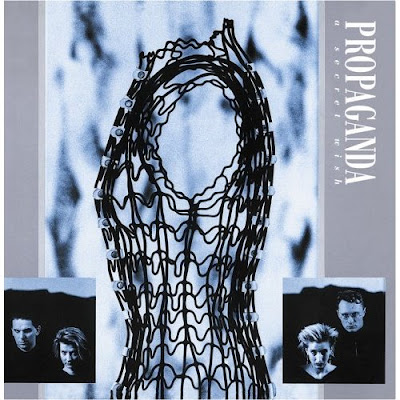 Back in the mid 80s or so I had relatively few expenses and relatively large income. I bought a lot of albums. On the unusual day that I didn't work several hours overtime, I'd drop by the local Hastings and buy a handful of albums. I bought a lot of stuff without actually knowing what it would sound like, because back then they didn't have digital copies that you could sample for free. I did seem to have a sort of sixth sense when it came to picking stuff that I'd like, still do I think. This is one that I bypassed several times before I decided to go ahead and buy it.

I don't know how this album ended up at that store. I saw it appear one day, but it was the only copy there. After I bought it they never replaced it on the shelf. It was just kind of odd.

Turned out that this became one of my favorite albums. Propaganda continued (maybe continues) to release albums, but back in the olden days there was no way to even find out about them and what they were doing. Someday I'll have to order some of their other stuff and see if it's as good as this.

What's it like? Well, heavily electronic but not machine-like, and not exclusively electronic. They use human drummers instead of drum machines, for one thing. They're from Germany, but their English accents are much better than, say Nena, for example. The main lead singer (female) has a beautiful alto voice.

Been a while since I heard this one. Look 'em up at Amazon and you can probably listen to some samples.
Posted by AlanDP at 12:39 PM