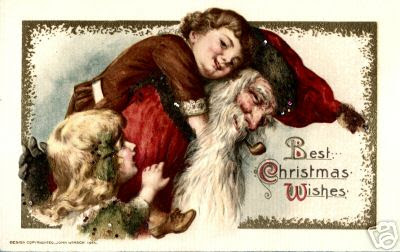 A postcard featuring a color drawing of Santa Claus and a young girl was mailed in 1914, but its journey was slower than Christmas. It just arrived in northwest Kansas.

The Christmas card was dated Dec. 23, 1914, and mailed to Ethel Martin of Oberlin, apparently from her cousins in Alma, Neb.

It's a mystery where it spent most of the last century, Oberlin Postmaster Steve Schultz said. "It's surprising that it never got thrown away," he said. "How someone found it, I don't know."

Ethel Martin is deceased, but Schultz said the post office wanted to get the card to a relative.

That's how the 93-year-old relic ended up with Bernice Martin, Ethel's sister-in-law. She said she believed the card had been found somewhere in Illinois.

"That's all we know," she said. "But it is kind of curious. We'd like to know how it got down there."

The card was placed inside another envelope with modern postage for the trip to Oberlin _ the one-cent postage of the early 20th century wouldn't have covered it, Martin said.

"We don't know much about it," she said. "But wherever they kept it, it was in perfect shape."

The card above is not the card in question. It is part of my digital collection of pipe-smoking Santas from 1914, which would make it also 93 years old.

We have had a great Christmas Eve. I ran the kids outside for a while to keep them from getting cabin fever, and we've been watching some traditional Christmas shows, drinking hot chocolate, and just having fun.
Posted by AlanDP at 4:07 PM