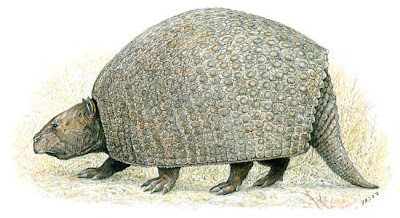 "When we collected this fossil, we had no idea that it would turn out to be a new species," said lead researcher Darin Croft of Case Western Reserve University in Ohio. "We knew that it would be an important specimen, given its completeness, but it was only after careful comparison to other known species that we realized how unusual it was."

The new species, named Parapropalaehoplophorus septentrionalis, belongs to a group of now-extinct mammals called glyptodonts that are most closely related to modern armadillos.

Unlike armadillos, which sport some jointed, movable plates, glyptodonts were armored with mostly immovable plates. And while P. septentrionalis weighed about 200 pounds (90 kilograms), some of the largest members of the group tipped the scales at 4,000 pounds (1,814 kilograms).

Yow. That could take out a Lone Star beer truck with no problem, I'd say.

New comments are not allowed.