A couple of interesting pipes popped up on eBay. 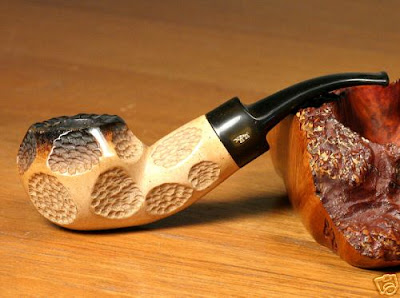 A solid block meerschaum from Tanganyika (now Tanzania). This is the best-looking Tanganyikan pipe I have ever seen. Maybe that's a strange statement to make, but I have actually had several pipes from that country pass through my hands, and they all looked more or less the same: very small, briar bowls jacketed in leather, with meerschaum inserts. I didn't keep any of them; I sold them all. This one is a big honkin' hunk of meer. Nice. 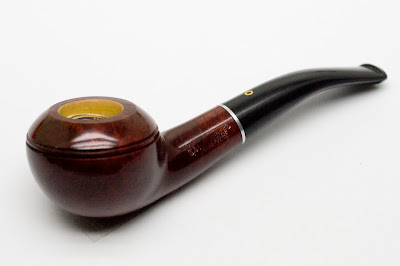 A KBB Yello-Bole. Unsmoked, the yellow "honey-cake" lining still intact. If you check out the other photos at the auction, you can see the original sales sticker still in the bottom of the bowl. KBB was the company that later became Kaywoodie. They created the Yello-Bole line to sell off their "seconds," that is, the pipes that they didn't deem quite good enough to bear the Kaywoodie name. Since this one is a KBB Yello-Bole instead of just a plain old Yello-Bole, that means it must be pretty old, and almost certainly of better quality than the later non-KBB Yello-Boles.

This is something you don't see very often. I briefly possessed an unsmoked Yello-Bole, but it was one of the aluminum-stemmed versions with a threaded-on bowl, so it didn't really appeal to me. It caused a minor flurry of a bidding war on eBay, though.

P.S. This one (if you want to quibble) might not actually be a Rhodesian. Some might call it a bullcap or something like that. I don't really care.
Posted by AlanDP at 7:46 AM