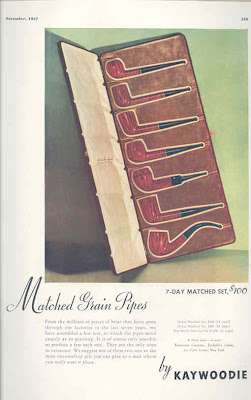 The "seven-day matched set" is, I think, the absolute pinnacle of pipe collecting. It is very difficult to create, and therefore much more expensive than simply the cost of all the pipes added together.

The briar must be carefully selected for matching grain, color and texture. As always, in the process of carving a pipe, some flaws will be found that necessitates discarding the burl and starting over again with yet another carefully-selected burl that matches all the other burls.

The "seven-day set" concept came from the idea of having a set of matching pipes, with one for each day of the week, so you could smoke one per day and be able to give it an entire week to rest before smoking it again. In reality, seven-day sets are far too rare and valuable to smoke. Unless you really want to completely destroy any collectible value, of course.

This set sold for $100 in 1937. Adjusted for inflation, that's more than $1,400 today. Of course Kaywoodie was not the only one to create seven-day sets. Other pipe makers who are known for more expensive pipes have created sets that sold for much more than that.

Shapes, from top: acorn, Liverpool, Dublin, apple, bulldog (with a saddle bit), another Dublin, and lastly a simple bent billiard. You may dispute me on the names of the top two. The first one looks more acorn-ish than apple-ish to me. Number two looks to me like it has a round shank, which would make it a Liverpool instead of a Canadian.
Posted by AlanDP at 8:59 AM