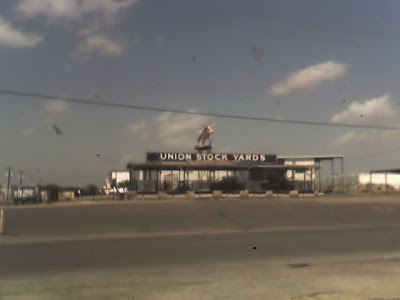 Here's a really lousy cell phone photo through my dirty windshield of the giant steer atop the old Union Stockyards on S. San Marcos street. I had to kill some time today before I showed up back at the office, so I parked in the shade of the billboard next to the Union Stockyards Building for a while. In my previous job, our office was that small white building to the right of the steer. Here's a story my dad told me.

When he was a little boy, he and his father (my grandpa) hauled a bull in to sell there. My grandpa had built his own wooden sideboards for his pickup to haul the bull. This was before the interstate system was built. They had to haul it all the way from the Floresville area. They came up Nogalitos Street and turned onto Furnish. Just as they crossed the small bridge at the intersection of Furnish and San Marcos, the bull spooked, kicked out the sideboards, and escaped. So they had a loose, somewhat perturbed bull running loose. Several men who were there at the stockyards ran across the street and helped them herd it into a pen.

Which reminds me yet again how much I would really like to get my hands on a map of San Antonio from before the interstates were built.
Posted by AlanDP at 2:17 PM