A Message from Great Cthulhu 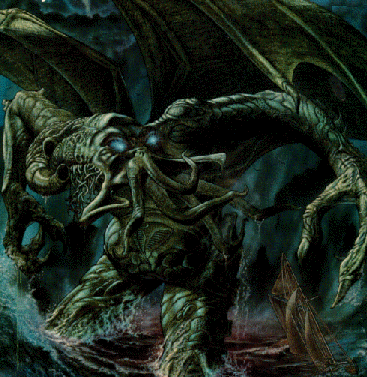 Irrelevant humans, I have been awaked from my millennial slumbers by a multitude of troublesome thoughts and dreams turning my way. I do not have a foolish conscience that drives me to set these misguided thoughts aright. I address you now only because the Time is not yet right and I really need to get some sleep.

It seems that many of you insignificant humans have made a crude attempt at "humor" (which I must admit I do not fully understand--although once the antics of the 976th form of Nyarlathotep did make me feel uncharacteristically light-hearted; figuratively of course since I do not actually have a heart) during your current election cycle by displaying various blasphemous caricatures of myself with such words as, "Why Vote For The Lesser Evil?" The implicit declaration being that I, somehow, am the Greater Evil. 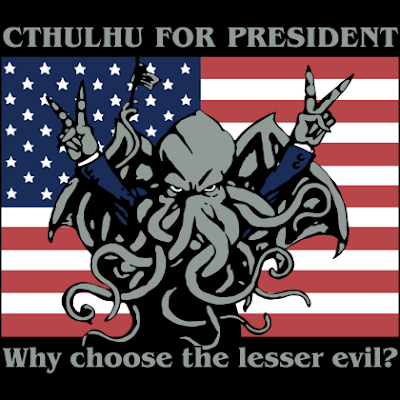 Please note that I do not fully understand this thing you call an "election." I have discussed it at length with many of my deep minions who were once--pardon the quotes--"human," and as the discussion ended and I was devouring them I came to the conclusion that your "elections" are all very absurd and insignificant. You may have full faith that I am a master of insanity, and the very idea that you must choose those who would oppress you is insane. The only true method of selecting a superior is with an eating competition, in my own completely unhumble opinion. The winner is the one who eats everyone else.

But back to the task at hand: why am I the so-called "greater evil?" Is it evil for one of you paltry humans to step on an insect? Is it evil to place noxious poisons throughout your dwelling-places to prevent what you call (excuse me if I chortle softly--I do find this concept somewhat "humorous") vermin from invading and taking up residence?

You waste your minuscule lives and pathetic energies trying to choose which of you should have power over others. Is servitude to another unimportant member of your species so essential to you? And why do these worthless chosen humans covet power so?

They lie, they cheat. They all take part in various ways and means of dominating you for no other reason than that they hunger for this power. And then they try to cover up what they have done to you with new lies. They seem to believe that they are better than you, and that the rules they arbitrarily create to enforce your servitude do not apply to them. And you believe them, you let them get away with it, and you do it over and over again.

Who then, is evil?

I tell you the truth: this worthless planet is my plaything. I do with it as I will. It is only an accident of my own unique metabolism that I am rendered somnolent for eons on end. There will come a time when the stars are once again aligned and I will truly and fully awaken. When that time comes, I will arise in diluvial annihilation, lay waste to this pointless blob of mud and devour you all. My deep minions will swim free over all this planet. Eventually I will devour them as well, and I will move on.

I will not do this because I bear you any ill will. I will do this because of who I am, and I will sweep this world clean of your pestilence in the same way that you would sweep an ant from your dining table.

But until then, you will continue to agonize over choosing those who are best able to lie, to cheat, to steal, and to force you into servitude to their whims.

I ask again: who then, is evil? One who tells you the truth, or one who lies so that he may trick you into believing serving him is necessary? One who regards you only as an edible and usually palatable pest, or a treacher of your own kind who will use force and deceit to subjugate you to his will?

I am transmitting this through the dreams of one of my insignificant human tools who sometimes fancies himself a "sensitive." I understand from his thoughts that he has access to a communications system called a "web" by using something called a "blog." I do not understand the exact definitions of these terms (although "blog" puts me in mind of the noise made the last time I squashed a shoggoth), yet I understand it is another useless invention of which you wretched humans are quite proud.

He writes this at my command. Heed his words carefully and give them thought, lest my slumbers once again become troubled and in my fury I unleash my oceanic minions on a wave of destruction the likes of which you worthless humans have never seen. In return for this service, he will be devoured quickly, cleanly, and in a relatively painless manner when the Time is right. Or so I have assured him.
Posted by AlanDP at 7:01 PM