Goodies in the big mailbox 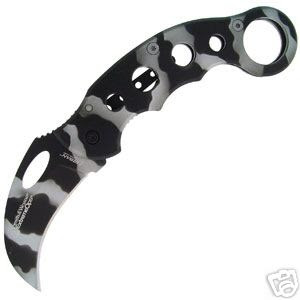 I had one of these before, and it became the most favoritest single-blade pocket knife I ever had. But then I lost it. They had apparently disappeared from eBay and S&W wasn't selling them anymore. But I finally found them being sold again. The problem I had finding them was because they aren't called the S&W Urban Camo Titanium Kerambit anymore. They are being listed as the S&W Cuttin' Horse Hawkbill. I'd still rather call it a kerambit.

Also received today a new gadget for vacuum sealing that is hand-powered, no electricity. It requires that I go buy some Mason jars, which I plan to do this week sometime. More details on it later after I've learned how to use it properly.

Thirdly, the rest of my tobacco order came in today. But I'm going to leave it all sealed until I can get the vacuum sealer thingy figured out so I can make sure it will be preserved properly after I break the seals.

Escudo this Saturday night, for sure!
Posted by AlanDP at 3:22 PM