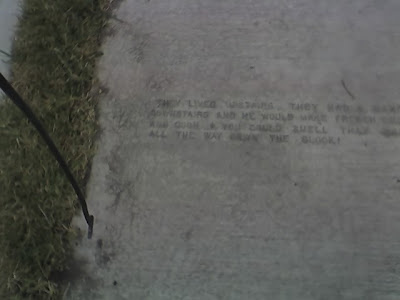 Today I worked in an area I hadn't been in yet off S. Presa just south of downtown. They put in new sidewalks some time ago, and there were short historical factoids imprinted in the concrete. I'm surprised this photo turned out at all. The glare from the sun was so bad I couldn't see if I was getting a photo of it or not. This was the first one I saw. There were many of these on the 300 and 400 blocks of Florida Street, and some on South Presa. This one says: THEY LIVED UPSTARS...THEY HAD A BAKER DOWNSTAIRS AND HE WOULD MAKE FRENCH BREAD, AND OOOH, YOU COULD SMELL THAT BREAD ALL THE WAY DOWN THE BLOCK.

I guess these were little bits from or about people who lived there or had lived there. In a couple of places they had also somehow managed to screen some grayscale photos directly onto the concrete. One of them was a photo of someone "presiding over the soda counter" at one of the old Pig Stand restaurants in 1938. I could have probably finished 15 or 20 minutes sooner, but I kept stopping to read the sidewalk.

That thing on the left is my hook.

P.S. Today I saw a dog that looked like a cross between a Rottweiler and a Dachshund. Oh, that such a creature could exist on this earth! I'm pretty sure I lost at least 1d4 SAN.
Posted by AlanDP at 2:23 PM