The other H.P. Lovecraft 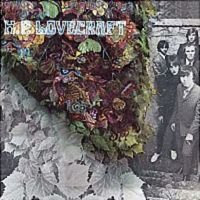 When was it that I read there was a group called H.P. Lovecraft? I don't remember. But if I recall correctly, it would have been more than 20 years ago and I went to Sundance Records in San Marcos to ask about them. They didn't have any of their albums in stock, but, the guy said, "I can probably find you one." I also seem to remember him warning me that it might be a little more expensive than the usual LP because of its vintage and relative scarcity. But it couldn't have been too expensive, because I did end up buying it.

So, is their self-titled first album from 1967 really weird and horrific and all that? No. H.P. Lovecraft were an acid rock band but was formed by people with roots in folk, and their skills (especially their vocals) are a little more polished than some of the other acid groups who were really punk before punk was called punk. (This was cool, because back then I was sort of half-assedly collecting psychedelic rock albums--and even bought a book on the subject). This was their first album, and it's made up mostly of covers. But the arrangements are quite original. There's an oddly syncopated version of "Let's Get Together" that sounds like the rhythms may be at least a little non-Euclidian. It also has a version of "Wayfaring Stranger" that has some unusual vocal harmonies. This is one of my favorite old folksongs/spirituals/whatever, and sometimes when I sing it to myself I've been hearing this harmony in my head, having forgotten where I originally heard it. So it was a nice surprise to hear those notes and remember where they came from.

There's one song on this album based on an HPL story: "The White Ship." It runs an epic 6:30+, back when three minutes was considered long for a song. They did four albums all told, but the record store guy couldn't find any of the others back then. I never really bothered to hunt for any of them later on.

Instrumentation is typical for the era and genre: guitars, drums, an organ. A harpsichord is also used for "The White Ship," unless my ears are deceiving me.
Posted by AlanDP at 2:10 PM