UPDATE: Bumped to the top to note that you can listen to the full album at YouTube if you wish by going to my YouTube channel and looking for Potatoes Vol. 1.

NOTE: This is an update to a post from August 27, 2008. I recently ripped the album with my new turntable, so I'm updating the post. 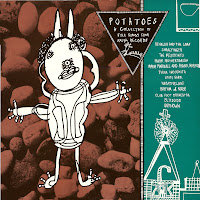 There used to be a small, obscure record label called Ralph Records. Technically there still is, but now it's not actually a music label. It's actually a distribution company for The Residents, for whom Ralph was originally created, after all. Also it's now called Ralph America.

I bought some stuff from them when I used to get their mail-order catalogs back in the 80s. As I said before, I probably discovered them via the book High Weirdness By Mail. I would have bought a lot more if I'd had the money, but alas. One of the albums they put out was Potatoes: A Collection of Folk Songs from Ralph Records in 1987. The spine of this jacket says it's Potatoes Vol. I. Was there ever a Vol. II? I don't know. I never heard of it, but of course I could be simply be ignorant of it.

This was one of the first albums I converted to mp3 back when I had my old turntable, but I didn't do the whole album. I skipped some of the songs that I didn't particularly care for--something which I'd never do now (UPDATE: this time I ripped the whole thing).

You won't find an entry in Wikipedia on this album, but you can find a different version (CD re-release) of it at Amazon.

As far back as any musical memory, and up to this very record, artists have tried to define and appropriate to their own satisfaction the ever elusive expression of folk music.

Ralph Records is proud to announce its seduction by the folk muse and to present the progeny of this joyful union.

Folk music is a reflection of life in the world. Given the world of today, folk music aficionados should be prepared for some novel twists. However, they shouldn't be surprised to hear traditional strains as well.

This collection of songs is what a handful of artists have done with what was handed down to them. Maybe these songs will in turn serve as motivation to future folk heroes.

We hope you enjoy them.

It starts out with a traditional American fiddle tune called "Fire on the Mountain" by Blitzoids, except that they "have chosen to arrange it like a mutant square dance." Except it's not so much a dance as a series of crashing lurches. Very nice.

Renaldo and the Loaf were associates of the mysterious The Residents. They perform song #2: a traditional Liverpudlian sea chanty called "Haul on the Bowline."

Song #3 is one of my favorites, "Canto del Pilon" by Maria Marquez and Frank Harris. It's a traditional Venezuelan woman's work song but all sounds except the singing were made with the Synclavier (totally state-of-the-art synthesizer music system in 1987). Very hypnotic and beautiful, even though I don't understand the language.

Terra Incognita are at song #5 with the traditional country folk hymn "Rank Stranger." Most people are more familiar with the version recorded by the Stanley Brothers, but this is a good version, too. 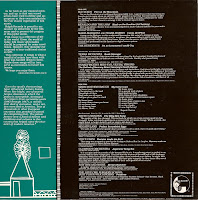 The last song on side 1 is "The Ballad of Sawney Bean/Sawney's Death Dance" by Snakefinger's Midi-Evil Vestal Virgins. Snakefinger is another associate of the Residents, and gained his nickname from the way his fingers fly while picking his guitar. This song was written by him, based on the true story of Sawney Bean, who led a clan of inbred cannibalistic Scots in the early 1400s until King James had him hunted down and executed. (click to download a sample)

Side 2 opens with "My Hometown" by Mark Mothersbaugh of Devo fame. A quick little guitar-accompanied anthem to Akron, Ohio. I intend to write a whole post about this song eventually, but I am still in the data-gathering phase. Teaser: unless I am mistaken, this song has a tie-in with an old Andy Griffith episode.

After that is "The Billy Bee Song." The female singer who recorded this did so anonymously. It sounds like she's sitting in a rocking chair on her porch singing this between slugs of moonshine. A sad, desperate song. This one presented some special problems for me because it was intentionally recorded to sound like it was being played on a very old, crackly record. Unfortunately it had a few real pops, which I had to try and dig out manually so the auto-filters wouldn't screw with the fake crackles. As a result, this is the only song that I don't consider to be a perfect rip. But what's left of the real pops probably aren't noticeable unless you've actually looked at the waveform and know what to listen for.

Then we have the legendary Negativland with "Perfect Scrambled Eggs." The milk makes all the difference.

"Mamma Made Me Do It" by Voice Farm is probably my second favorite song on the album, after "Sawney Bean" (and tied with "Canto del Pilon"). This is another of the original songs on the album, written by members of Voice Farm and inspired by a film called La Juajira (I think that's misspelled. I think the title is really La Guajira, with a "G"). A sweet, creepy song with a spoken-word ending.

This is the part about the bones...

There's a little sleepy village in South America where they have a little ritual, and they...they dig up the bodies of the dead after they've been buried for about eight years and, uh...they take the fleshy part...what was the fleshy part off the bones and...it's considered an honor to do this...the women, mostly, and...the men are sitting around playing cards while the women are crying...

Next is Clubfoot Orchestra with "Japanese Song Too," which is either an adaptation of a Japanese folk song or a song they wrote that sounds like a Japanese folk song--I'm not sure which. Then there's Rhythm and Noise with "Berta's Hammer," a two-song medly of prison songs that sounds like it's being sung by a real chain gang. The closer is a short traditional song called "Potatoes."

So... used CDs at Amazon start at around $30 (new ones are selling for $70). Is it worth it? To me, no. Especially since the re-release seems to have deleted a couple of my favorites and replaced them with songs I've never heard. I guess it's a good thing I bought the LP for less than $10 back in 1987. Especially since it provided so much entertainment way back when by way of my memorizing, and subsequently singing, "Sawney Bean" after I'd had a couple of beers.

Way back when, like I said. But I still have the song memorized.

Ripping results: perfect except for "The Billy Bee Song," as I mentioned above.