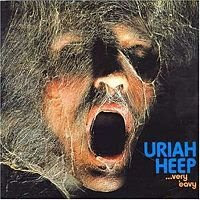 Very 'umble. Ah, me and Uriah Heep! The group that provided the soundtrack to many a dungeon-building session when I was in college.

My first-year room-mate had The Magician's Birthday, an original printing that had seen better days. I grew to like it a lot, and later bought my own, although a newer printing with fewer liner notes. Then I got the prequel to that, Demons & Wizards, and a few other albums of theirs on vinyl.

I don't remember which store or really anything else about buying Very 'eavy...Very 'umble. I looked up some info on it yesterday as I was digitizing it, and discovered that there were two versions released. The U.K. version, which looks like this, and the U.S. version, which has different cover art and has one song, "Lucy Blues," changed to a different song, "Bird of Prey." Somehow I got the U.K. version. A very macabre cover, indeed. Even more macabre when you know that the band member pictured died at the young age of 38 in 1985.

This was Heep's first album, vintage 1970. An overly melodramatic Rolling Stone music critic said, "If this group makes it I'll have to commit suicide. From the first note you know you don't want to hear any more." [via Wikipedia] Heh heh. I wonder whatever happened to her. Maybe she decided she'd be better off dancing about architecture. Rolling Stone always hated these guys.

Other Uriah Heep entries in my collection, besides those previously mentioned: Return to Fantasy (LP), Abominog (LP), Equator (LP), and the aforementioned Demons and Magician both on CD as well. "I never thought I'd see these on CD," I said. "They probably never thought they'd see it, either," said the record-store guy. Return is a cool album, with a couple of stereotypically anthemic songs as they were sometimes wont to do. The other two are from later incarnations of the group, and don't thrill me as much, although I do like "Angel" from Equator.

They never got really popular, at least not in the U.S., but they were quite an influence in what people have come to call "progressive metal," that is, metal that is actually musical. That statement is bound to yank someone's chain somewhere.
Posted by AlanDP at 8:04 AM