This alley in the Rigsby/New Braunfels area is not as bad as it might look. 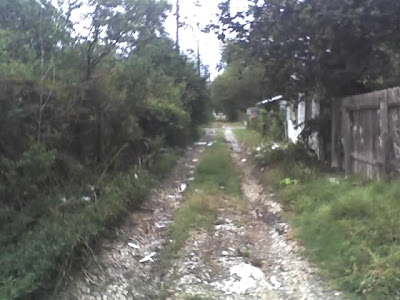 This route has less than 100 alley meters out of a total of 559 meters. That's an unusually high amount of meters for a route that's in this condition (that is, not something you can read really fast). This is probably the worst alley. The bad part about it is that for about a two-block stretch, it seems that everyone has piled junk from their yards in the alley. So it's filthy and you have to be careful where you step and what you reach into. The length of this route does tend to make it somewhat grueling during hot weather. It was no big deal today. It works back and forth, all the way from New Braunfels to Clark. I think the photo is from an alley between Highland and Kayton, but I don't remember for sure.

And there was one thing that I didn't take a picture of, although it was notable, because it was pretty disgusting. In front of one house I found several dead rats. Upon closer inspection, I saw that they had all been trapped with glue traps, and of course they were still stuck to the traps. One of them was lying on top of the meter and as I flipped it out of the way I got some of the glue on the tip of my hook. Yeesh. Dead rat glue. A couple of them were quite large. I'd say they could compete with the rats that used to be in our barn, that had a very protein-rich diet of peanut hay and protein meal. Shudder.

In case you're wondering, I always wear gloves.

I was in the mood to load up my 80s directory today. There are only 30 songs in it, which I downloaded from f*le-sh*ring (fleshring?) services in the past. Random 10: