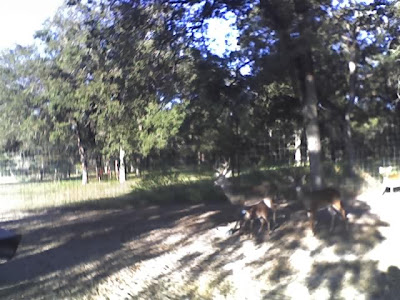 I'm feeding the deer while my dad has a weekend off. The big guy there is named Bumps. His last year's antlers would have scored 158 on Boone & Crockett. The little guy next to him is a buck yearling named Joshua. He's about the tamest deer we have, because he's been bottle-fed. My dad ran into another deer-rancher who had a bunch of yearlings in a trailer, evacuating from Hurricane Ike. They started talking and my dad ended up buying Joshua on the spot. I was supposed to bottle-feed him today, but he didn't want to have anything to do with a bottle. I don't know if it was just me, or if he's getting off the bottle. He was scarfing down the deer food with all the adults like nobody's business, so he's definitely not going hungry. And there are a couple of does around, too. Does are numbered. Only bucks get names.

This is the only photo that produced anything recognizable. Something I have learned about deer: they are hard to photograph. Your eye can see them clearly, but their natural camouflage makes them disappear into the brush with a camera. Most of the pictures looked like nothing but shadows and trees.

Bumps is also quite tame, for a white-tail. He'll walk up to about 10-15 feet away from you if you stand still and be quiet. A rack of antlers like his on a living deer that close is an impressive sight.
Posted by AlanDP at 9:22 PM