Raping, pillaging, and bathing every Saturday 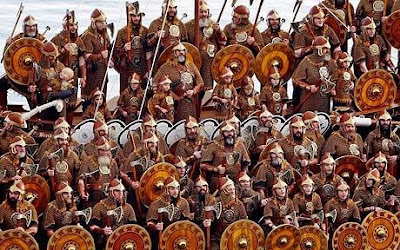 They say that the Norse explorers, far from being obsessed with fighting and drinking, were a largely-peaceful race who were even criticised for being too hygienic.

The university's department of Anglo-Saxon, Norse and Celtic has published a guide revealing how much of the Vikings' history has been misrepresented.

They did not, in fact, wear horned or winged helmets. And they appear to have been a vain race who were concerned about their appearance.

"It seems that the Vikings may not have been as hairy and dirty as is commonly imagined," the guide says.

"A medieval chronicler, John of Wallingford, talking about the eleventh century, complained that the Danes were too clean - they combed their hair every day, washed every Saturday, and changed their clothes regularly."

Interesting article regarding the allegedly misportrayed Vikings. I had to include the photo at the top because it just cracks me up. I think that one guy (seventh from the left, back row) must be saying, "Dude, I forgot my beard brush!"
Posted by AlanDP at 3:04 PM