Scientific American has a collection of 12 Examples of Kinetic Illusion in Op Art. Such as the Enigma Illusion, below. 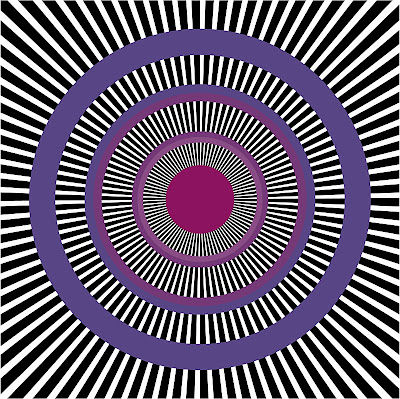 Some technical explanations are included, for example:

Op artist Isia Leviant unknowingly combined the MacKay Rays and the BBC wallboard illusion in the now classic Enigma illusion. Several original Leviant paintings illustrating this effect hang in the San Francisco Exploratorium, including its very first version (known as the Traffic Illusion). As you view the Enigma image, notice how the concentric purple rings appear to fill with rapid circular motion, as if millions of tiny and barely visible cars were driving hell-bent-for-leather around a track. But does the illusion originate in the mind or in the eye? The evidence was conflicting until we found, in collaboration with our neuroscientist colleagues Xoana G. Troncoso and Jorge Otero-Millan, at the Barrow Neurological Institute in Phoenix, Arizona, that the illusory motion is driven by microsaccades: small, involuntary eye movements that occur during visual fixation. The precise brain mechanisms leading to the perception of the illusion are still unknown, however. One possibility is that microsaccades produce small shifts in the geometrical position of the peripheral portions of the image. The reversals in contrast that these shifts produce could then create the illusion of motion. Neuroscientist and artist Bevil Conway and his colleagues at Harvard Medical School recently showed that pairs of stimuli of different contrasts can generate motion signals in visual cortex neurons, and proposed that this neural mechanism may underlie the perception of illusory motion in certain static patterns.

Still hard to understand, at least for this layman. So you may be better off ignoring the explanations and just grooving on the graphics.
Posted by AlanDP at 9:13 AM