I continue to be fascinated with the artwork of this anime. I have been making a study of facial close-ups, that is, the face fills the entire screen, or nearly so. Sometimes only part of the face fills the screen. The animation technique in Hellsing makes very extensive use of such very close close-ups. Starting with Order01: The Undead, here is the first group of shots of the main character, Alucard. There are more tight close-ups of him than any other character in this episode, which makes sense, because we must become thoroughly acquainted with the star in the first episode. Click on all graphics for a larger version. 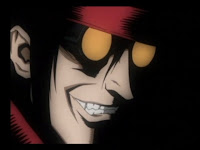 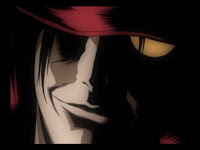 Amused but not quite so threatening. 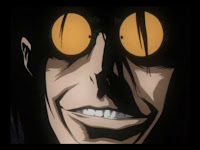 Laughing at someone else's threat. 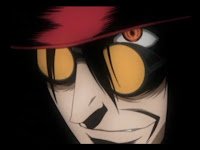 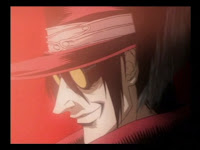 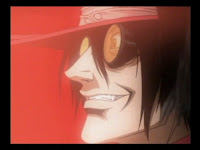 And the S is about to hit the F.
We rarely get straight-in shots of Alucard's eyes, though they do happen sometimes. In the next installment we'll look at some of his more violent and feral moments.
Posted by AlanDP at 7:17 PM