Album: Night of the Demon 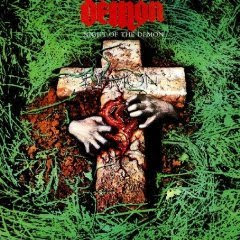 There's a scream in the night
There's death on the wind
And a heartbeat that's pounding like rain
There's a flash in the sky
A cry of a hound
As if someone is wailing the dead
And the nightmare begins as the Devil rides out
From the heat through the gates of Hell
And there's no escape from the curse of the damned
You better beware
Uh...well. Lemme 'splain.

There was a time when I often bought albums blind, or rather, deaf. By which I mean I had no idea what the music was going to sound like, but I bought it anyway because something about it struck me as interesting, or amusing, or at least worth spending eight or nine dollars on. I included a larger version of the album cover at the top because the art was one of the reasons I bought it. A band named Demon, an album called Night of the Demon, an album cover that looked like something from a horror movie. Not an especially good horror movie, perhaps, but a horror movie nonetheless.

The best part of this album is the first pair of tracks. Track #1--"Full Moon"--is a 90-second soundscape, rather than a song, which opens with ominous synthesizer filter sweeps in a foreboding minor key, overlayed by sound effects that sound like a combination demon conjuration/human sacrifice is going on (I suppose...not that I would know what either of those things really sound like). This leads into the first song, "Night of the Demon," which I quoted the opening lyrics from above.

I remember I played this for Brer once, and about 30 seconds into that first track, he pointed at the far corner of the room and shouted, "Run for your lives! There's not even a speaker in that corner!" Just one of those little nuggets of memory that still makes me laugh when I think about it.

I bought this album because I thought it would be amusing, nothing more. I also remember the guy at Sundance Records (warning: MySpace link) getting excited and saying something like, "Oh man that's great stuff! You're gonna love this!" Heh.

This is one of those records that I've played only once, in order to make this tape. So the record should still be in very good condition. Amazon shows the remastered CD going for $22.99, and at this moment there is only one in stock there. It makes me wonder if my old record has become at least a little collectible.

Demon was supposed to have been a British heavy metal band. I listen to it now and think, this is supposed to be heavy metal? [Correction: New Wave Heavy Metal, whatever that is.] I just read up on them at Wikipedia, and it looks like I might be interested in some of their later stuff, seeing as how they went in other directions later on. But I'm sure it's all very hard to find now.

I have one other album of theirs, The Unexpected Guest. But I never put it on tape, so I haven't heard it in a long time.

The songs are okay, at least up to track #5, "Decisions." But after that it's pretty mediocre. If someone wanted to argue that the entire album is in the mediocre range, I would not contradict them. But after track #5 it kind of goes downhill. In fact, "Decisions" may be the song I would choose if I was forced to pick a favorite.

UPDATED to add: I forgot to mention one thing about this album that annoys me. The recording engineer must have been deaf. Most of the time, the vocals are so far down in the murk that it's hard to even hear them, much less understand them. I wonder if the remastered CD sounds any better.