Wow, I have several drafts saved now just to remind myself of the albums I want to say something about, and I wasn't sure which one I wanted to write about today, but I just converted another Deep Purple (In Rock) album so I thought I'd go back and cover this one first, even though it was released later.

Powerhouse is a sort of this & that album that was released in 1977, but consists of older stuff. I would not recommend it for someone who is not already a confirmed Deep Purple fan. I picked it up somewhere back in the 80s when I would buy anything of theirs that I happened to see in a record store. By the way, it looks like this one is currently out of print, and is not available on CD. Amazon doesn't have a picture of it in their link, so here's a picture of the jacket. 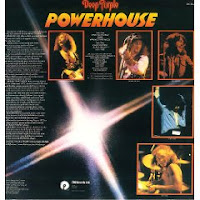 Track #1 is "Painted Horse," a studio outtake (a song that didn't make onto the album) from Who Do We Think We Are recorded in July 1972. This one has something unusual for a DP song: a prominent harmonica part. I don't know who's playing it, though. My record is in my vinyl archive in another room, and I don't feel like digging it out to uncover this kind of detail. Maybe later.

Track #2 is a live version of "Hush," from the ill-fated Concerto for Group and Orchestra, recorded in September 1969. Read all the details at the link if you want. A DVD of this concert was released not all that long ago, which I might have to try and hunt down.

Track #3 is another live one, an extended (nearly 13 minutes) instrumental called "Wring that Neck." This one is also from the Concerto for Group and Orchestra of September 1969. Lots of good organ work by Jon Lord on this one. Everyone who plays an instrument takes turns at the front, with some passages of Lord and Ritchie Blackmore (lead guitar) mimicking each other.

Track #4 is one more from the Concerto, a live version of one of my favorites, "Child in Time." This one is especially interesting in that it gives a glimpse of song development. Jon Lord has a prominent organ part on this song, and it sounds in this version like he's still working out all the kinks and isn't exactly sure of how he wants to play it. After subtracting the introduction and applause, it clocks in at about a minute and a half longer (total time about 11:40) than the studio version that was released on In Rock the following year.

Track #5 is another live one, "Black Night," from the Made in Japan album recorded live in August 1972.

Track #6 is another studio outtake called "Cry Free," from the In Rock sessions recorded in January 1970.

A solid album overall, with some filling-in-the-holes for those of us who weren't lucky enough to score a record of the Concerto.