Seras Victoria is something of an enigma. A very young, 20-something woman who somehow has become part of a special elite police squad, in which all her fellow officers are much more mature 30- to 40-something men. How did she become part of this squad? We're never told. Here are a collection of extreme close-ups from the first episode. Warning: spoilers ahead. 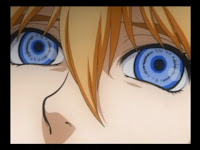 Caught by the vampire priest, and she is still not entirely sure of what is happening. In distress, we get a shot of her huge blue eyes. Seras is drawn like a typical young anime female: disproportionately large eyes, tousled hair, and breasts that threaten to pop the buttons of her uniform at the slightest provocation. 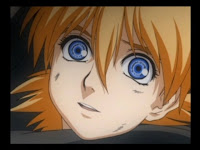 The same place, but a shot that shows her entire face instead of just her eyes. The vampire priest has her in a chokehold, she is dirty from fighting and running all day, and she's still trying to figure out if all this is real. 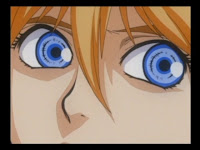 Moments later, she makes eye contact with Alucard. A new resolve now shows in her eyes, she has apparently figured out what Alucard is about to do and is already in agreement with him. 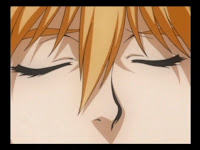 Alucard tells her he is going to shoot through her to kill the priest, and offers her the option of becoming a vampire rather than dying. She says yes, and closes her eyes. 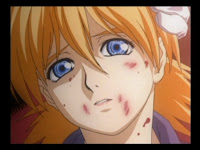 Now she lies dying, her head supported by Alucard's hand, her face besmirched with her own splattered blood. This is the last time we see her blue eyes.

Next up, one more look at Alucard.