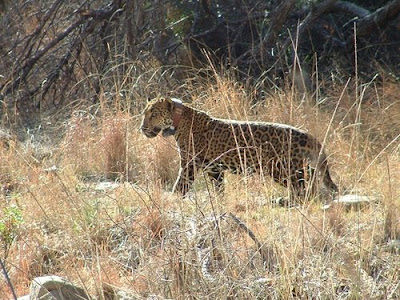 A jaguar was captured southwest of Tucson this week during an Arizona Game and Fish Department research study. The study was actually aimed at monitoring black bear and mountain lion habitats.

The male cat has been fitted with a satellite tracking collar and released. The collar will provide biologists with location updates every few hours and it is hopeful that this data will provide information on a little-studied population segment of this species. This is the first time in the U.S. that a jaguar has been able to be followed in this manner.

Jaguars are, of course, native to North America. But it was once believed that they were extinct in the United States. I would not be surprised if this one had wandered up from Mexico.

UPDATE: Sad news in an update from Cryptomundo.
Posted by AlanDP at 3:28 PM