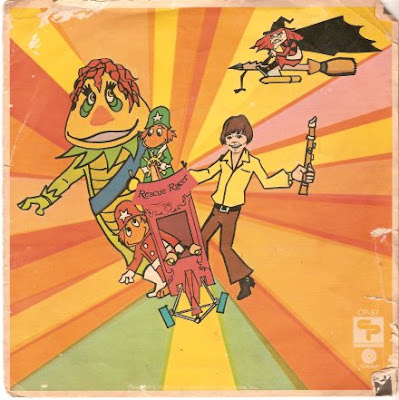 UPDATE: I'm bumping this back to the top in order to announce that this record may now be listened to in full by visiting my YouTube channel.

And here is one of my prized possessions. One day when I was five years old, a large, stiff manila envelope arrived in the mail, and it had my name on it. Without my knowing about it, my mother had taken advantage of an offer on some cereal box to enter me into the H.R. Pufnstuf Fan Club. There were other items in the package. I think there was a certificate, and I remember some kind of pin that I wore on my shirt everywhere until it broke. But this record was the best part of it, and I somehow have managed to preserve it intact for 40 years.

It is a 7-inch, 45 rpm EP including 11 songs that were used on the show. There are a few songs left out, but these are all the best songs. 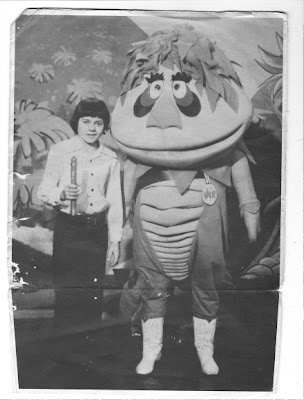 Having recently watched all 17 episodes plus all available extras and interviews on the DVD set, I can say that the songs on this record are not exactly the same as they were presented on the TV show. For example, in the show the song "Pronouns" had a flute solo played by Freddie, but on the record there's just an instrumental bridge with no flute. 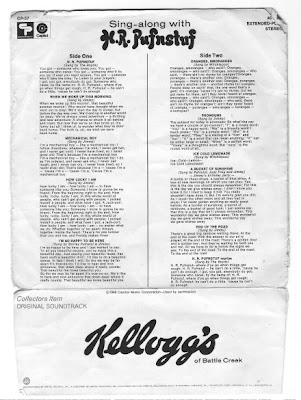 I played this record over and over and over again when I was a kid. When they stopped running the show on Saturday mornings I still had this record to remind me of the best TV show I had ever seen. The sequence of songs has become firmly fixed in my head. If I see that episode where Witchiepoo sings "Ice Cold Lemonade" I immediately hear the beginning of "A Bucket of Sunshine" in my head when she stops singing.

Side Two
1. Oranges, Smoranges
2. Pronouns
3. Ice Cold Lemonade (if you ever hear a meter reader coming down the street whistling this song, you'll know it's me)
4. A Bucket of Sunshine
5. End of the Road
6. H.R. Pufnstuf reprise 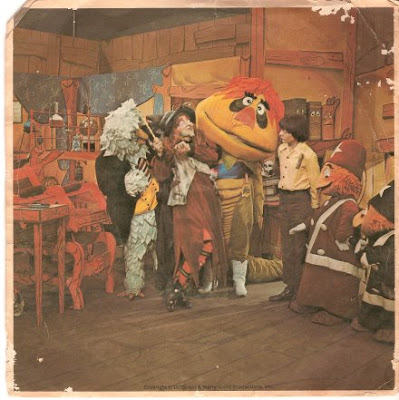 Yes, the jacket is somewhat tattered, but this is understandable when it began as the last thing a small child could hold in his hands and stare at to make sure he didn't forget his favorite escapist fantasy as he slowly grew older and came to realize that childhood was slipping away. But now we have the DVD, and some things are good again.

The record itself is in remarkably good condition, some pops and clicks but no jumps, and the mp3 files I created cleaned up very well. Another notable thing about this record is that it is one of the few I ripped with the old turntable before I gave up on it, and I still have the old files I created a few years ago when I did that. So I was able to compare the old files with the new, and there is a huge difference in sound quality. That old turntable was so horrendously noisy that I shouldn't even have bothered.

Here's one of the first songs I ever memorized as a small child. I still sing it sometimes, when I feel I need some encouragement.
Posted by AlanDP at 9:11 PM