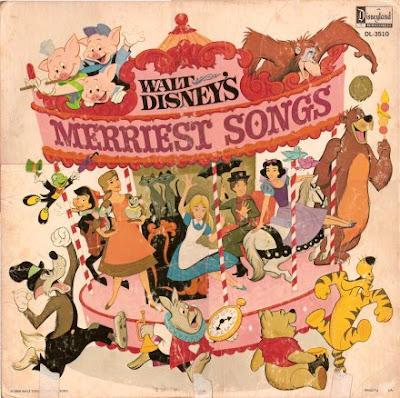 This is a record I've had since 1968, when it was released as some sort of promotional thing by Gulf--the petroleum company which no longer exists. When I was a kid, we bought all our gas, oil, etc., from Gulf. Here's a track list.

Side A
1. Chim Chim Cheree
2. Whistle While You Work
3. Work Song
4. Lavender Blue
5. Siamese Cat Song
6. Who's Afraid of the Big Bad Wolf

Side B
1. Ten Feet Off the Ground
2. Give a Little Whistle
3. Work Shop Song
4. The Wonderful Thing About Tiggers
5. I Wanna Be Like You
6. I'm Late

Some of these are taken from original soundtracks, some of them are re-made versions. Also the record is monophonic. Unfortunately, this one hasn't weathered the years well. There is a lot of noise, pops, clicks, and skips. However, I am pleased to report that my two favorite songs did survive without any skips, and they are "Ten Feet Off the Ground" and "I Wanna Be Like You." "Ten Feet" is sung by Louis Armstrong (he also plays a trumpet solo), and was from a movie which I never saw called The One and Only, Genuine, Original Family Band. "I Wanna" is of course from The Jungle Book, which was an utter travesty of a rip-off if you've ever read the real book, but this is still a cool song and credits as performers Louis Prima, Phil Harris and Sebastian Cabot (Mr. French!).

I played the snot out of this record when I was 4 years old, except for that "Siamese Cat Song" which I often skipped. It always creeped me out when I was a little kid, and I still don't really like to hear it. But of course since I used to skip over it so often, it's now the best-sounding track on the record.

Click here to download a sample of "Ten Feet Off the Ground." The link will take you to another website where you can download the sample. Sorry, but I can't use esnips anymore.
Posted by AlanDP at 2:30 PM